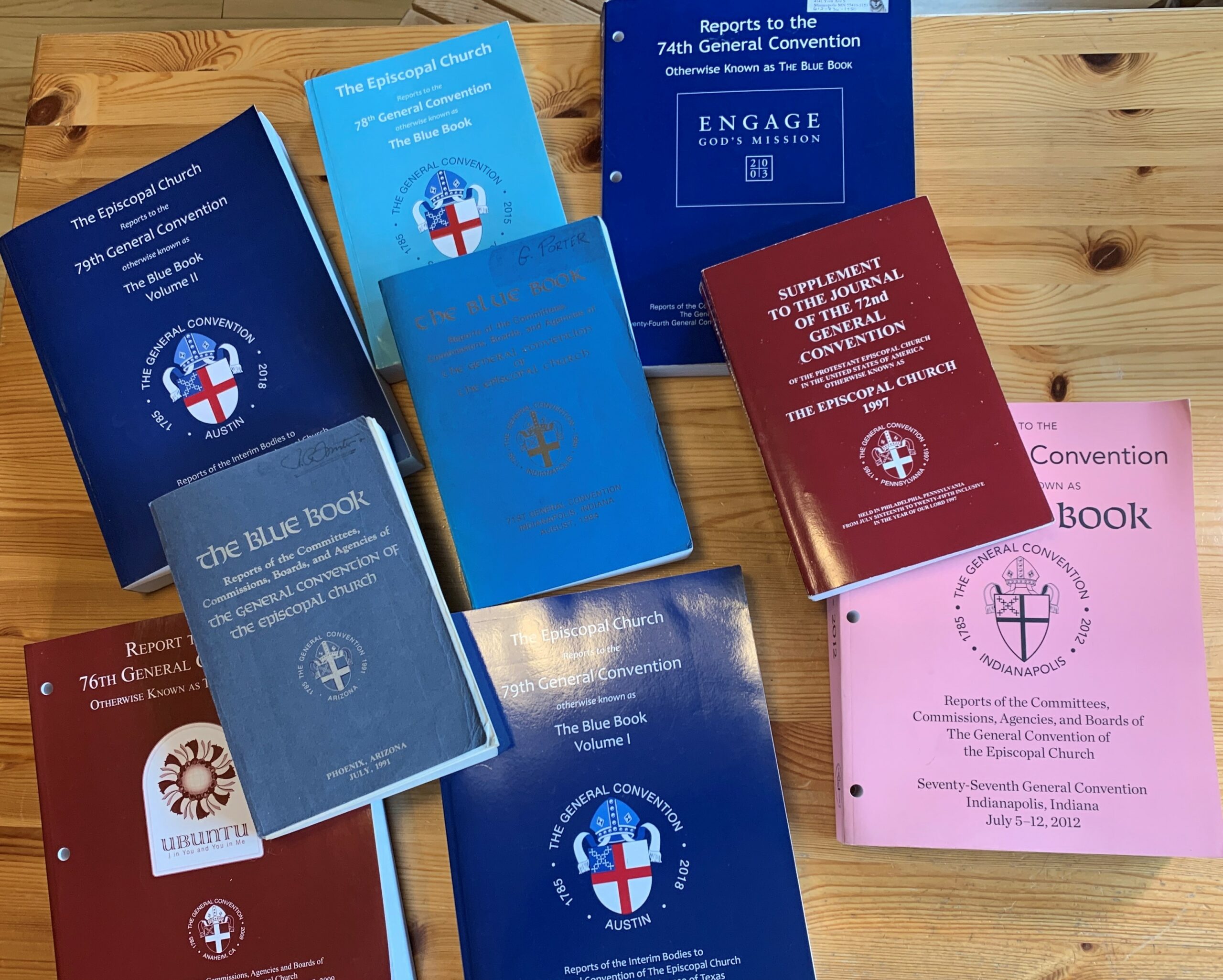 Sure, sometimes you count on this blog for thoughtful exploration of theological matters or sundry reflections on church life. Other times, this blog brings you hard-hitting news. Today is one of those days.

Exclusive scoops of the Blue (or “Blue”) Book color are not new around here. This blog in 2009 broke the news that the “Blue” book was to be crimson. Then in 2012, this blog was your source to learn that the “Blue” book would be salmon. And with the singing of a Solemn Te Deum in 2015, we broke the news that the Blue Book would be a very lovely shade of blue. Alas, in 2018, we were scooped by the House of Deputies email newsletter, but we did still manage to share some news. This year, we’re back with the kind of journalistic scoop that’s sure to catch the attention of the Pulitzer Prize committee.

To share the news, and to say a bit about the Blue Book, I interviewed Canon Barlowe.

Gunn: Let’s start with an introduction. Can you tell readers of Seven whole days about the position you hold in the church? What do you do? How did you land the gig? 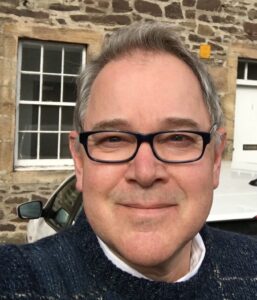 Barlowe: I’m blessed to serve as the Executive Officer of the General Convention, as well as the elected Secretary of the General Convention. In general terms, I oversee the governance of The Episcopal Church and administer the record-keeping of information and documents related to official acts of the church. I am also an officer of the Domestic and Foreign Missionary Society, the nonprofit entity through which the church conducts its temporal business. It’s an honor to work with my colleagues and friends in the General Convention Office (universally known as the GCO) – among the most talented, imaginative, and hard-working of the staff of the church.

I’ve served since 2013, after being selected by the presiding officers and Executive Council. For more details of my job, take a look at https://www.generalconvention.org/secretary-of-the-general-convention.

Is choosing the color of the Blue Book the best part of your job?

Now let’s get right to the big news. I’m told you are prepared to share the color of the Blue Book (or maybe it’s a “Blue” “Book” this time) with our readers. Is the Blue Book going to be blue for the 80th General Convention?

It depends on your definition of blue. As for me and my household, we follow the science, which says that “blue” has a light wavelength between about 450 and 495 nanometers. Under that definition, it is blue.

And I think the natural follow-up question is, will the Blue Book be a book?

In 2021, we might think of “book” more as a verb than a noun. You might even say that, in making their reports, our Interim Bodies have “booked” a place for discussion by the 80th General Convention.

In the nominal sense, however, most people will be reading the Blue Book on their screens, although on-demand printing will be possible.

For those of our readers who may not be serious church wonks, what is in the Blue Book and why should they care?

I happen to be one of the people who reads every page of the Blue Book. Do you think that’s widespread?

You’d be surprised. We had thousands of digital downloads of the Blue Book in 2018, and hundreds of copies were printed to order. The publication of the Blue Book during my tenure has been “serialized,” with some reports being released in a soft launch in March and continuing each Friday until all are released by the summer. We release them as they are edited and translated, to get them out as soon as possible. Almost every day during Blue Book season, I hear from Deputies and Bishops, and indeed people throughout the church, who are eager for more.

Editor’s Note: You can read some of the Blue Book online already. More will be added in due course, but start reading today!

For those who dive into the Blue Book, what are some of the highlights of this new edition?

There are so many highlights, it’s hard to name just a few. But expect to engage important ideas about both the external mission of the church and the internal organization of our common life. The scope of the work of the Interim Bodies has been breathtaking, ranging from fresh looks at what “world mission” means in an acceleratingly interconnected world; to proposed strategies that are rooted to our deepest vocation as stewards of God’s world; to a new synthesis of what it means to transform toward justice – as well as proposals about liturgies, budget reorganization, and canonical revisions.

If someone only had time to read part of it, is there one section you’d recommend? I mean, besides the Forward Movement report, of course.

I’d suggest they start by reading the report from the Executive Council. Executive Council acts for General Convention between conventions in a variety of ways, and its talented and hard-working members champion and oversee much of the churchwide ministry of The Episcopal Church. Episcopalians who read that report will be inspired by what our leadership have been doing.

Let’s get back to the color for a moment. What was your inspiration for this Convention’s color? 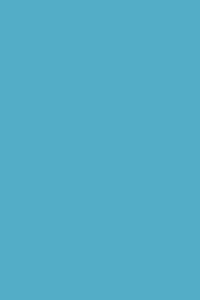 I’m tempted to say it came in a vision – but that’s true only insofar as I was looking for new paint colors for our home, and was delighted to find a shade of blue that made me quite happy. When I learned its name, “St Giles Blue,” I immediately thought, “That’s the color for the next Blue Book.”

St Giles was a 7th century Christian living in very turbulent times. Renowned for his humility and simplicity of life, later Christians named Giles as one of Fourteen Holy Helpers, whose intercessions relieved suffering. He was especially associated with protection from plague – an association with particular resonance during the pandemic. St Giles is also the traditional patron of Edinburgh, where the High Kirk on the Royal Mile is named for him.

The color itself was first discovered in a 17th century home in a town named for the saint (Wimborne St Giles in Dorset, England), and is said to dispel shadows and inspire hope and confidence. Here’s a video featuring St Giles Blue:

A couple of conventions ago, the color was Tiffany blue. So General Convention enthusiasts might have wanted to buy jewelry to receive a gift box in our theme color. And then last time it was International Klein Blue, potentially inspiring people to visit museums. What activities will I be tempted into by this new Blue Book? 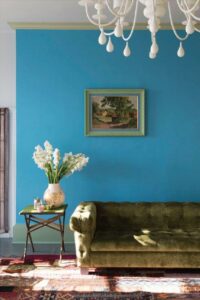 Maybe some home improvements or other DYI? But for the more introspective, I hope it might inspire, in line with its namesake, a commitment to healing ourselves, our neighbors, and our world. I hope the 80th General Convention will be remembered as a time when we dispelled shadows and inspired hope and confidence.

Your predecessor liked to have a non-blue Blue Book. Do you think you’ll stick with blue Blue Books in your tenure?

And by the way, there really were “Green Books”.

I gather it takes a village to make a Blue Book. Can you give us a sense of how many people work on it? What’s involved in creating all these reports?

There are about 900 members of the Interim Bodies of General Convention, each with an important part in praying, planning, researching, discerning, deliberating, and recommending what is presented in the Blue Book. The reports of the approximately 80 Interim Bodies are expected, once edited, to produce about 1100 pages, which will be divided into three volumes for both English and Spanish. Two talented people in my office are working on the editing and production – a complex undertaking since everything (including resolutions) have to integrate into the legislative software that underpins the “Virtual Binder,” making it immediately available to Deputies and Bishops as they perfect legislation. This year, we are benefitting from some new software we designed for the Blue Book and the Constitution and Canons – software designed to increase efficiencies, reduce scribal errors, and present information in line with good design principles and ease of use.

It sounds like a lot – and it is – but it is helpful to remember that the Blue Book is not bureaucratic output: it is the aspirations of faithful Episcopalians trying to follow Jesus through the promptings of the Spirit.

General Convention has been rescheduled to 2022, due to the pandemic. Can you say why you and your colleagues decided to keep the Convention as an in-person gathering rather than trying it online as some other churches did with their churchwide gatherings?

The safety of our people, our communities, and our hosts was paramount in the decision. We certainly considered an online gathering, as the Presbyterians and Unitarian Universalists did. After attending those and other such church assemblies, it was clear to me that it would be impossible to hold a General Convention online without doing damage to the participatory, robust nature of our church governance and polity. Furthermore, there was no time (nor the considerable funding that would be required) to develop software solutions to allow for the bicameral unanimity our constitution requires, even if we severely reduced the scope of decision-making (which was what other churches did.)

A team appointed by the presiding officers, representing a range of opinions in the church, examined possibilities over a period of months. We concluded that postponement was the best option.

Moving the convention to 2022 was itself no small feat: millions of dollars of contracts has to be renegotiated, always with the goal of saving the jobs of the hotel workers, restaurant staff, convention employees — as well as sparing the church from financial penalty. I am happy to say we were successful on both fronts.

What do you think the focal issues of this next General Convention will be?

I suspect that furthering our commitments to racial reconciliation; working for the healing of the creation; and empowering the mission of the “post-covid” church will be paramount. I believe we will also do some important work on revealing and dismantling the social (and ecclesial) structures that cause violence against women. And I’m sure our conversations of how we should pray commonly in this part of the 21st century will occupy much consideration.

In addition, the House of Deputies will also be electing a new president, and the search for a new Presiding Bishop will begin.

Is the rumor true that Betsey Bell went over to work in the GCO so she can see to it that an on-site curling rink is part of the requirement for any future General Convention?

Only one scoop per interview! My lips are sealed.

Last, but not least, can you please pass along my suggestion to the Presiding Officers that we install trap doors under all the speakers’ podiums, so people who go over their time limit are whisked away?

Such a 20th century idea! You’ll find we have installed buttons for each presiding officer to teleport such transgressors back to their seats.

But thanks for the suggestion! And thanks for all the great work you and Forward Movement do for church.

Thank you for the scoop, for your time in this interview, and for all you do.

Readers can learn more about the General Convention Office and its work at the GCO website. I hope to meet many readers of this blog at the next General Convention in Baltimore, July 7-14, 2022. You can find me in the House of Deputies or in the exhibit hall at the Forward Movement booth.

The top photo shows some of Sally Johnson’s impressive collection of Blue and “Blue” Books. Photo by church geek par excellence Sally Johnson. (On this blog, church geek is the highest form of praise.)