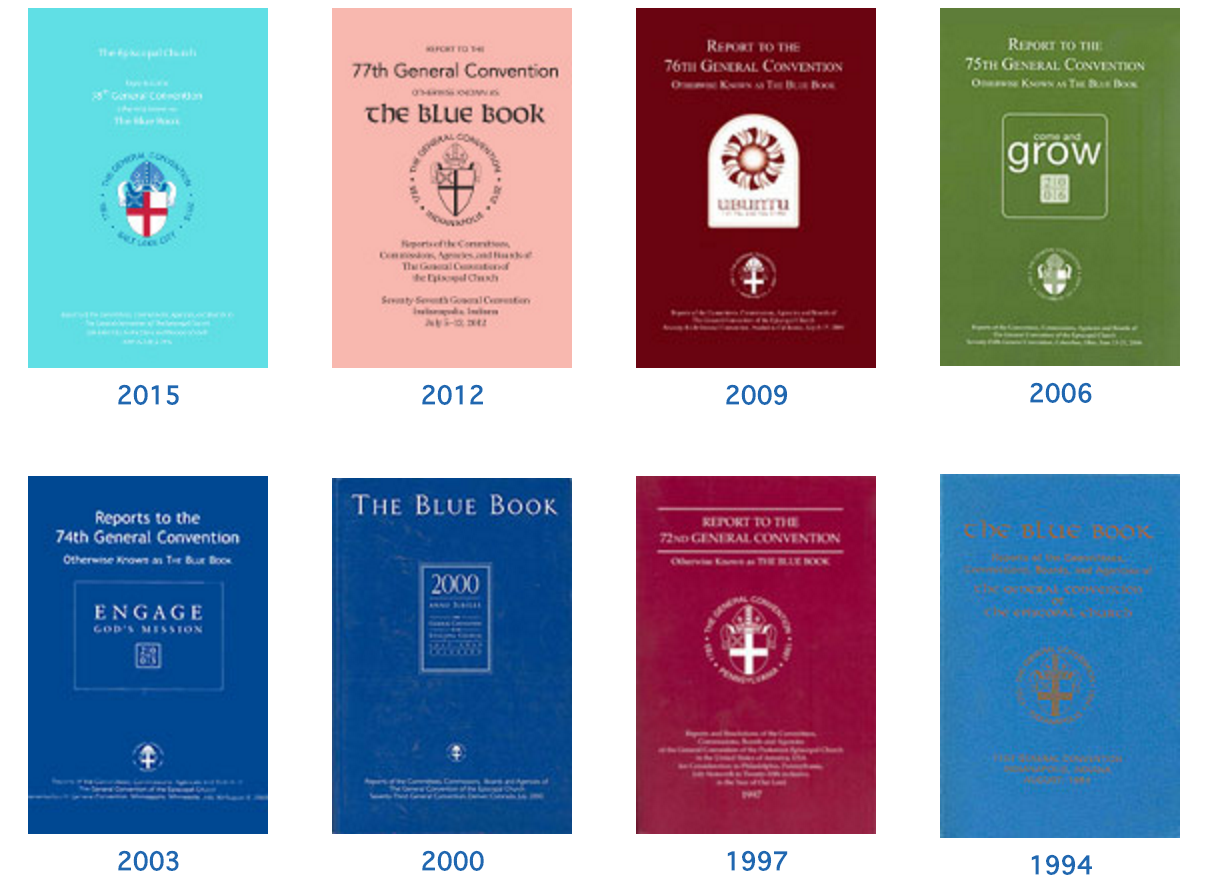 As long-time readers will know, this blog has been the source of exclusive breaking news about the Episcopal Church’s General Convention Blue Book for the last three General Conventions. What is the Blue Book, you ask? It is the collection official reports from various church bodies made available to bishops and deputies ahead of each triennial gathering. You can read them from past years in this wonderful gallery of church geekery.

If you looked at that gallery of geekery, you will immediately notice that the Blue Book was, in many years, actually a so-called Blue Book. Only in 2015 did our church return to the Godly custom of making sure the Blue Book is actually blue. This is good, because Jesus said, “Let your word be ‘Yes, Yes’ or ‘No, No’; any time blue is not blue, it comes from the evil one.” Or something like that. 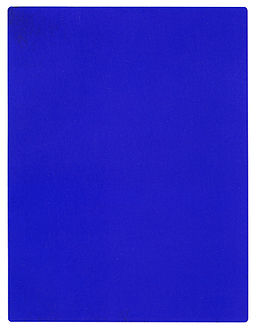 Alas, this year, we’ve been scooped! The House of Deputies email newsletter has revealed that the Blue Book will be Klein Blue! Now, we’re not going to be bitter about not getting the scoop, because your intrepid team of reporters has been able to get access to new, exclusive information about the Blue Book. But before that (see, I learned how to string out a teaser headline from Rachel Maddow), let us bask in the wonders of this shade of blue. Created in 1957 by French painter Yves Klein, the color was registered as a trademark, and subsequently used in one of Klein’s most famous works, IKB 191 (1962).

The color of the Blue Book is chosen by the Rev’d Canon Michael Barlowe, the Executive Officer and Secretary of the General Convention. Thanks to Canon Barlowe, General Convention is getting classed up a bit. And your author much appreciates the Blue Book being blue, because it’s tiresome to write “so-called” before it each time or to enclose the word blue in scare quotes.

In any case, here comes the exclusive news. But first, a commercial break. Did you know you can sign up for emails to receive Seven whole days blog posts the moment they post? Yup, just put your email address in the box at the upper-left, and hit subscribe. Also, you can follow Seven whole days on Facebook for the latest posts and other sundries. Why not do both?

Now to the breaking news exclusive. I have confirmed with Canon Barlowe that the Blue Book next year will continue an unbroken tradition since 1785. There will be no scratch ‘n sniff feature, and also there is no pop-up insert. Continuing this venerable tradition makes sense, but let’s face it. Wouldn’t it be cool to be able to preview the smell of the exhibit hall? Of course, you’d want the preview to simulate the Thistle Farms booth rather than the food court. And how cool would it be to have a pop-up William White in the center?

But wait, there’s more. We have further breaking, exclusive news! Canon Barlowe, in an exclusive email interview with the 7WD news team, has said the following. “There will be an Easter egg that will reveal the answer to the question every Episcopalian has been asking since 1785.” How great is that?! The answer to the question we’ve all been asking for more than 230 years! What could it be?

People. I cannot wait to download or purchase the printed Blue Book. Whatever else is in there, the Easter egg will make the purchase worthwhile.

On a final, serious, note, it is worth delving into the Blue Book. I’ve blogged my way through it in years past, and I’ll probably do the same again. General Convention does incredibly important work to lead our church, and it’s good to pay attention to the issues that come before the Convention. While I do like to have some fun in the midst of what can seem like a legislative slog, I also think the work is vital, especially in this time of transition and transformation within our church.

Stay tuned to 7WD for more news of General Convention and its Blue Book as we learn it, whether humorous, snarky, or serious.