Preparing for the zombie (church) apocalypse

Zombies are trendy these days, and the Christian publishing industry is always churning out books on church leadership. So it should not surprise anyone that there’s a book called “Zombie Church: Breathing Life Back into the Body of Christ.” I haven’t read it. In fact, I only ran across it when I was thinking about this blog post about undead congregations — churches that sort of look alive but really died long ago. 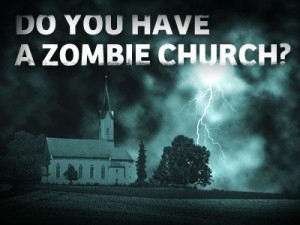 We have lots of zombie churches in the Episcopal Church, which helps to explain our steady decline as a denomination. In fact, this is the thing that would have been good to discuss at some point in, oh I don’t know, the last six General Conventions. Instead we whistle past the graveyard by fighting over this and that. Or we insist that it’s OK our churches are turning into zombies because — look! there’s a Presbyterian zombie and a few Methodist ones too!

Here’s how to spot a zombie church (my list, not the one in the book of the same name):

There are other signs, but you get the idea. Here’s what a living church looks like:

Do you doubt that we have loads of zombie churches? 72% of Episcopal congregations reported they were under “financial stress” in 2010, the most recent year for which figures are available. The number has been rising steadily. As of 2011, the number of shrinking churches is three times the number of growing churches, based on a five-year Average Sunday Attendance change of at least ten percent. The same report with that alarming fact also tells us that in the last five years, giving has kept up with inflation only one year (2008). Read those two reports for more alarming signs of decline. And almost all of it is due to zombie churches!

So why do we tolerate them? Closing churches is hard. Members, the people who created their zombie church by resisting change, don’t like the ultimate change of closing. Too many bishops are unwilling to do the hard work of closing churches and teaching why closing churches is a good thing. Some will say that a closed church is a failure of the kingdom. I disagree. A zombie church is a failure of the kingdom, because an ossified museum/membership culture that’s all about preservation, survival, and self-support is the antithesis of the Gospel. Indeed, the Gospel is about risk, fearless proclamation, and love of our neighbors.

Too many zombie churches discredit the witness of the church, not just the Episcopal church, but the whole body of Christ. At a time when the world is desperate for Good News, zombie churches say that we can’t be bothered. All we care about is ourselves or, worse yet, our buildings. Every zombie church is a billboard for a church that has given up on the Gospel.

There are also pragmatic considerations. New congregations are much more likely to grow than older congregations. I don’t mean the age of the parishioners (though that matters too, in a way that works against us Episcopalians). Churches planted more recently are more likely to grow than churches which have been around for a while. Why do we imagine that we need to keep church buildings in places that were convenient for folks in the 19th century? Why do we insist that congregations have to possess their own building? Why can’t we say that some congregations can die while new ones are born?

Speaking of the spiritually deceased, Jesus said, “Let the dead bury their own dead.” He would no doubt say the same thing today, about us as individuals and, I think, about many of our congregations. While I weep with those who will weep when their congregation closes, I do not think that sadness is a good enough reason to avoid doing hard things. If Jesus took note of the zombie fad today, he might offer something along these lines. “Let the undead bury their own undead, and by the way, the undead should die. See other saying about the dead.”

Amidst all this, there is plenty of good news. Across the country, there are congregations of all sizes thriving. After much travel across the church, I now believe that congregations who want to thrive can do so. It’s not even complicated, but it is hard. It is hard to grow as an individual follower of Jesus, and it is hard to grow a congregation. It is hard in that it is costly, like discipleship. We have to be willing to change, to grow, the give things up. And we have to be ready, if needed, to die.

So let’s stop ignoring the biggest challenge in church life. It isn’t battles over human sexuality or the number of Committees, Commissions, Agencies, and Boards. The biggest challenge isn’t where our church headquarters is located or what kind of music we should sing. Our biggest challenge is that too many Episcopal congregations are zombies. We sort of look alive, but we don’t have the characteristics of living churches.

If congregations can be revived, fantastic. Resurrection, yay! Sadly, many are beyond the point of resuscitation. Others will willfully circle the proverbial drain for years or decades, doing nothing to proclaim the Kingdom. Let’s get ready. It’s time to kill some zombies or let them die. Let’s spend our energy as a church on congregations who are thriving, not letting our energy be depleted by zombies.

Like it or not, deferred maintenance, aging congregants, and dwindling numbers are pushing us toward the zombie apocalypse. Let’s get ready. There are four things we can do: