For the last couple of weeks, I have been in much conversation with Susan Snook and Tom Ferguson (known for their blogs, A Good and Joyful Thing and Crusty Old Dean). We have been talking about our church and the situation in which we find ourselves. By many accounts, prospects for the Episcopal Church are bleak. 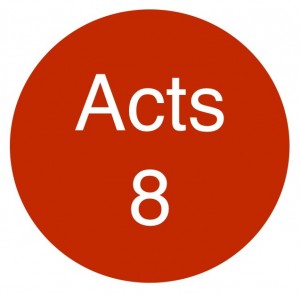 We’ve seen public feuding among our churchwide leaders. We are in the midst of a decades-long period of decline. There is a coming demographic change as the baby boomers die, which means that we’ll lose a vast number of members in a short time. Oh, and the financial situation is pretty grim in a great manycongregations.

And yet, there is hope. Or, more to the point, there is hope if we look outside our current situation and our readily available options. With God all things are possible. The church has been in rough spots before, and it has survived warring factions. Now is a time for us to look beyond where we are, to see where we can go. We are in an Acts 8 moment. At next week’s General Convention, it’s time for us to turn the corner.

Precisely in the need to move outside Jerusalem , the church found its opportunity to engage the world. In thinking beyond the familiar world of Judaism, the church was able to offer the Good News to Gentiles. A small vision was crushed in order to make possible a broad, world-changing vision.

Lots of people who are now in leadership positions in our church have imagined a world in which we will have a large staff at 815 Second Avenue in New York. Others find familiarity in a complex network of committees and commissions. We continue to fight the same battles because predictablity is comfortable. Too many of our congregations are engaged merely in maintenance rather than mission. Evangelism is virtually unheard of.

The simple fact is that while it is true that the church has survived all manner of misfortune in its history, it is also true that the church as we know it will not survive much longer. In Christian history, the last couple of hundred years in general, and the last few decades in particular, are anomalous. The world has become post-Christian, and we’re still carrying on as if we live in Christendom. We try to cling to vast institutions worthy of the Roman Empire.

Our church will soon begin to look much more like it did in 250 than in 1950. Before Constantine, the church traveled lightly — no vast bureaucracy, not many buildings, and a focus on life-changing encounters with the Savior who called people to costly discipleship.

So this time of ours is not to be wasted with petty squabbles over turf in institutions that won’t exist much longer. We must not convey to the world a small-minded vision of who we are and what we are called to do. Now is not a time to ask less of our members, but rather more.

What I’d like to see is this: a real conversation about our church and its future. Let’s briefly ackowledge the reality of our present situation, and then let us find hope in our future. Christ has given us a mission to make disciples of all nations. Christ has given us a mission to proclaim Good News, especially to those at the margins of society.

My hope is that, at this General Convention, we will manage to do three things:

1. Pass a transitional budget that gets us through the next triennium without making radical, ill-considered changes. Crusty Old Dean has written about this; we are in danger of creating unintended consequences. The PB’s budget is not perfect, but it is the best we have at the moment. Let’s pass something like that and not spend too much time hashing out pointless arguments over budget lines.

2.  Most important: let’s make sure that we set up a fresh group of people with fresh ideas about how our church might adapt for our time. Sure, we need the experience of decades-long governance veterans. But we also need to hear from people who think General Convention is a total waste of time. (I’m not in either one of those groups, but I’d like their voices to be heard.) Let’s get people who can listen to ideas they disagree with and engage in inquisitive and open conversation. This group needs to function outside our vastly broken current system.

3. Let’s have a bit more joy and prayer. Drama is not becoming. Some more humor — and grace-filled prayer — would be a great addition to General Convention. What if we all began to pray for those with whom we disagree on this or that?

OK, now I’m getting to the punchline. Finally. On Thursday, July 5, at 9:30 p.m., join the Acts 8 Moment. (Location TBA.) Like the Acts 8 Moment on Facebook to keep up with what’s happening. Tom Ferguson, Susan Snook, and I will gather people for prayer and conversation about this moment in our church’s life. Please come if you are in Indy. We’re working on video streaming for those who aren’t going to be at General Convention.

But more important than anything else, pray for our church and our leaders. With God all things are possible, but we might need to set aside our own agendas to make room for God’s call to us.

We have a great opportunity to be transformed by our Acts 8 moment. We have an opportunity to engage God’s work in new ways for our time. Will we seize this moment to grow? Or will we cling to fear?