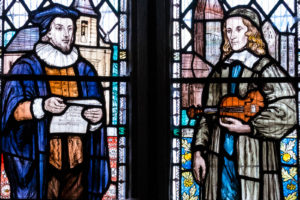 As you might guess with a blog title inspired by a George Herbert poem, I’m a huge fan of Herbert. So I was delighted when the publisher asked me if they could send along a review copy of George Herbert: 100 Poems (Cambridge University Press, 2016. 174 pages, $20). While I’m hardly an expert on metaphysical poets, perhaps they imagined me to be qualified for having this blog title. Or maybe it was my dog, named for the same poet (and Lent Madness 2010 Golden Halo winner, by the way). Whatever the reason, I’m thrilled to say a few words about a book I thoroughly enjoyed.

Herbert’s English poetry was published only after his death, with instructions having been sent to close friend Nicholas Ferrar saying, “if he can think it may turn to the advantage of any dejected poor soul, let it be made public; if not let him burn it; for I and it are less than the least of God’s mercies.” Thanks be to God, Ferrar found Herbert’s poetry worth preserving. The Temple was published in 1633 with some 160 English poems.

This volume, just as expected, has 100 of Herbert’s poems selected by Helen Wilcox, with a short introduction to Herbert’s poetry at the front of the volume. There’s also an index of titles and first lines, along with a glossary. If you haven’t spent much time reading seventeenth century prose and poetry, you’ll be glad for the glossary. You’d be forgiven for not knowing such words as Chymick or Pomander, though most of the vocabulary will not require a flip to the back of the book. Fortunately, the poems are presented with their original spelling, though the typography is pleasantly modern. All in all, this makes for a very accessible and compact collection of some of the poetic gems of not only Anglican Christianity but of the whole of the English language.

There are plenty of ways to read Herbert’s poetry. You can find all of The Temple online, and there are scads of editions. I myself have several. So why another book of Herbert’s poetry? This volume practically begs the reader to dive into the riches of these treasures. The size is small and, other than handy line numbers, the arrangement of the poems is as Herbert wrote them and Ferrar first edited them. As with many poets, for many of Herbert’s poems, the layout of the typography matters for the reading experience. Beyond the famous “Easter Wings” or “The Altar” with their exotic layout, nearly all the poems have important spacing and line breaks to highlight or de-emphasize certain rhythms and words. You just don’t get the best experience as a reader if you’re not reading the poems in their original layout. With its line numbers, this volume would be ideal for group study, and the generous margins make note-taking easy.

So, obviously, I love this little book. But let me say a little about Herbert’s poetry. If you only know it through some of his familiar hymns (“Let all the world in every corner sing” or, indeed, the eponymous hymn for this blog, “King of glory, king of peace”), you have a treat in store. There is a humility and a tenacious faith in these poems that is exceedingly refreshing. With few exceptions, they are immediately accessible theologically and aesthetically. And, wow, there is plenty to think about.

Take, for example, the first stanza of “H. Baptisme (II)”.

Since, Lord, to thee
A narrow way and little gate
Is all the passage, on my infancie
Thou didst lay hold, and antedate
My faith in me.

Beautiful, and theologically rich. And so it is with nearly every poem here.

When Herbert was priest at Bemerton, he used to walk from the village into Salisbury for evensong at the cathedral but also to wile away evenings with friends, singing and playing lute. It’s not hard to imagine many of these poems set to music, even the ones that don’t already have tunes fixed in our minds. Perhaps these convivial evenings are the place where raw poetic compositions were refined, and one could speculate that these gatherings of friends led Herbert to capture deep explorations into the depth of human life and breadth of God’s grandeur in such utterly approachable lyrics.

Consider his poem, “The British Church”, which offers a useful corrective to the current understanding that Anglicanism is some kind of Christian Epicureanism. In this poem, Herbert makes it clear that “The mean thy praise and glorie is” does not refer to the center of any old thing, but rather very specifically between the wonton hills of Rome and the shy valleys of Geneva. In other words, there is surely a theological and aesthetic center in Anglicanism, but it is also located in a very specific place; it is not, as some today would suggest, the tempered moderation between any two arbitrary extremes.

I could write plenty more, but I very much encourage you to buy and to savor this book. While an ebook is available, this is one to own in paper. It comes in a nice slip cover with hardback binding. Keep it at your bedside for morning or bedtime reading, or perhaps leave it at work for mental excursions into rural England during your breaks.

Even if you’re not the poetry-reading type, I highly recommend the poetry of George Herbert, and I cannot think of a better way to enter this world.