Stir up thy power, O Lord!

The second of my meditations on collects for an Advent quiet day offered at St. Stephen’s, Providence. The first meditation is here and the third one here.

Collect for the Third Sunday of Advent
Stir up thy power, O Lord, and with great might come among us; and, because we are sorely hindered by our sins, let thy bountiful grace and mercy speedily help and deliver us; through Jesus Christ our Lord, to whom, with thee and the Holy Ghost, be honor and glory, world without end. Amen. 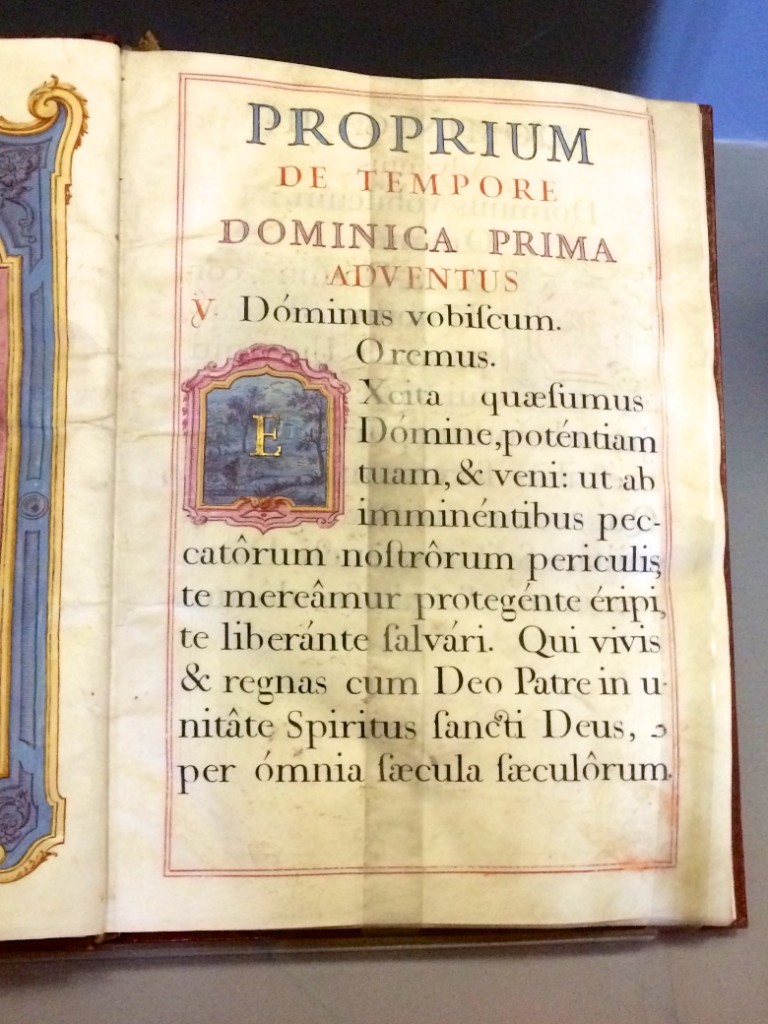 A couple of weeks ago, I was on vacation in Lisbon. Wherever I go in the world, I always enjoy visiting churches, and so I made it a point to visit the grand cathedral in Lisbon. You can pay a few Euros and visit the Treasury, and so I did that. There were lovely late medieval vestments and all manner of shiny liturgical items. It was glorious.

As I was staring into one of the display cases, I noticed an ancient illuminated missal. My Latin isn’t particularly good, but I can usually recognize and sometimes even read ecclesiastical texts. I noticed one of the books was open to the collect for the First Sunday of Advent. With large illumination, the collect began EXCITA. Even with my inadequate Latin, I could gather that was “Stir up”! Excita! I was a bit captivated by that Latin word. I kept thinking about it. Excite! Stir Up!

When I got back to the hotel, I did some Googling, because I was curious about a collect for the first Sunday of Advent that began “Stir up!” It turns out, as some of you may know, that four of the five collects at the end of the liturgical year once began Excita! in much of the Western church. Apparently, the framers of medieval liturgical books thought the people needed some end-of-year, end-of-time stirring up. Our collect for the third Sunday of Advent finds its origin among the earliest medieval liturgical sources, one of those ancient end-of-the-year “stir up” collects.

I haven’t really stopped thinking about “Stir up!” in the last couple of weeks. For some reason, I can’t quite let it go. I am captivated by the idea of God stirring us up, of being stirred up by God’s power. It really suggests we won’t be left the same, that things will get mixed up in us and in the world through God’s power. I think of the swirling nothingness at the beginning, out of which God brought all Creation into being, and how God’s creativity continues in the world. Stir up thy power!

But on a deeper level, I wonder. How, exactly, does God stir up his power? Can power even be stirred? And is there any other kind of power that God possesses other than “great might”? Doesn’t that go without saying? I’ve been accused of over-thinking things, and perhaps that’s what has happened here. Maybe it is enough to bask in the winsome poetry of God’s power stirring up and coming among us, changing everything in us and in the world that needs to be changed. Stir up, indeed.

Among many Christians today, it isn’t fashionable to talk about our sins at all, let alone to acknowledge that they might sorely hinder us. That is, we might actually be broken and in desperate need of God’s mighty power to fix us. Perhaps if we Christians talked about the power of sin a bit more, we wouldn’t be so shocked by what we see in own lives and in our world, because we could see ourselves and our world for what it is: a broken place, sorely hindered by sin, in great need of God’s stirring up. And we might have some perspective on our place in the world when we realize that it’s not really about us, and that we’re not going to do much without God’s bountiful grace and mercy.

If for nothing else, we could call to mind for those around us the reason for the season, as we sometimes hear people say. Of course, the reason for the Christmas season is Jesus, not commerce. It’s about Christ child, not Frosty the Snowman. That’s not a particularly noteworthy claim. But beyond that, the real reason for the season is redemption: Christ’s Incarnation and Atonement offer us redemption — we can be relieved of the burden of our sins. To pray fervently, “Stir up thy power, O Lord, and with great might come among us” is to pray for God to enter into our lives and into our world to fix what is manifestly broken.

Some would accuse me of being a bit of a downer. To talk about sin at such a “happy” time of year is depressing, they might say. They might be right. But for me, at least, I find an honest acknowledgment that I need, that I depend, on God’s grace to be a relief. It’s no longer about me, and I don’t have to bear the weight of fixing things, including myself, alone. To talk about sin is to make sense of what I see in my own life and in the pages of newspapers. To talk about sin makes possible further talk — talk about redemption, about freedom, about life abundant, and about the Incarnation of Jesus Christ. Stir up thy power, O Lord!

In what ways do you see yourself and the world around as sorely hindered by sin?

What would it be like to be delivered? In other words, what would you have God stir up with great might?

The photo is by yours truly of a late medieval missal in the treasury of the cathedral in Lisbon.