The Great Vigil of Easter: The lifeless stone is a sign of new life

The angel said to the women, “Do not be afraid; for I know that you seek Jesus who was crucified. He is not here; for he has risen, as he said.”

In the name of God: Father, Son, and Holy Spirit. Amen.

Among the Gospel accounts of the Resurrection, St. Matthew’s version is perhaps the most spectacular. This is the version that includes an earthquake, fainting guards, and — my favorite flourish — the angel sitting on the stone which has just been rolled away. We hearers of this Gospel receive the message that God’s power is victorious, that life has conquered death in a dazzling way. I remain firm in my conviction that the correct description for what happens at the tomb is — to use the technical theological term — a “cosmic smackdown.” Evil, death, might, and fear have been vanquished by righteousness, life, love, and hope. 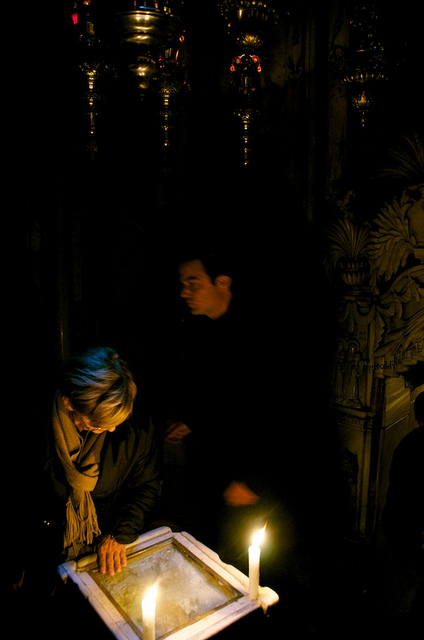 A couple of years ago, I was able to join a pilgrimage to the Holy Land. Without doubt, the highlight of my time there was a night I was able to spend in the Church of the Holy Sepulchre with other pilgrims from around the world. In the middle of the night, apart from the crowds of other tourists, one has the silence and the luxury of time to savor this most sacred spot.

If you have been to the Church of the Holy Sepulchre, you probably experienced what I experienced during the day: flocks of tourists crowding Calvary Chapel, the Stone of Anointing, and of course, Christ’s Tomb. Usually, one has to queue up to enter the traditional site of Christ’s Tomb, and then one gets 15 seconds or so before the priest chases you away. But overnight with pilgrims, it was different. I sat inside the Tomb for nearly an hour praying. It was a blessing beyond compare to contemplate the mystery of the Resurrection in the place where we believe it took happened.

That night gave me another gift. In the room outside the Tomb, where most of the time we are queued up to get to the main attraction, there is a stone under glass. One could be forgiven for passing by it without noticing it amidst all the crowds. But that night, I had a chance to stare at that stone, to examine it closely, to treasure it. Tradition says that this is a fragment of the very same stone that once guarded the Tomb and which the angel rolled away.

To be honest, I hadn’t really thought about the stone much before that night in Jerusalem. After all, it’s not exactly the headline in a magnificent story. As a reader, I tend to focus on the Risen Christ, or the women, or even the angel. That stone, however, deserves a bit of our attention.

You see, that stone represents both captivity and liberation. Rolling away that stone is a vital part of the story of Christ’s passing over from death into life. You might recall the ending of the Passion we heard on Palm Sunday: “Pilate said to them, ‘You have a guard of soldiers; go, make [the sepulchre] as secure as you can.’ So they went and made the sepulchre secure by sealing the stone and setting a guard.”

The empire did its best to defeat God’s love. The powers and principalities killed Jesus and sealed him in a grave. Perhaps that night, there was even a party in the praetorium in which people who thought of themselves as powerful and mighty celebrated their imagined victory. But that same stone — the instrument by which might and fear tried to contain love and hope — that same stone was rolled away by God’s messenger. Lifeless stone became a sign of God’s life.

The disciples themselves didn’t recognize their Lord on the road to Emmaus. We should be gentle with ourselves if we sometimes fail to see the Risen Lord. One of the many reasons to come to Mass regularly is that we can practice seeing Jesus among us in the breaking of the bread.

If we take Easter seriously — if we want to do more than enjoy the glorious anthems, lovely flowers, beloved hymns, and familiar traditions — if we want to celebrate Easter in a way that matters, we have to be prepared to live a life that shows forth God’s victory over death.

What would this Easter life look like? We would seek ways of being righteous instead of being mighty. We would be fierce as we insist that hope defeats fear. We would have the audacity to suggest that death is not the end, but the beginning of new life. In a word, we would take to heart the injunction of both the angel and of our Lord, “Do not be afraid.”

Dear friends in Christ, because of God’s victory over death, we can live a life without fear. That life, if we manage to get it right even occasionally, will change the world. We can be bold to proclaim hope in a world gripped by fear. We can be bold to offer a path of peace which is stronger than the way of might. We can be bold to manifest God’s love to the lost, the least, and the last.

Alleluia! Christ is risen!
The Lord is risen indeed! Alleluia!