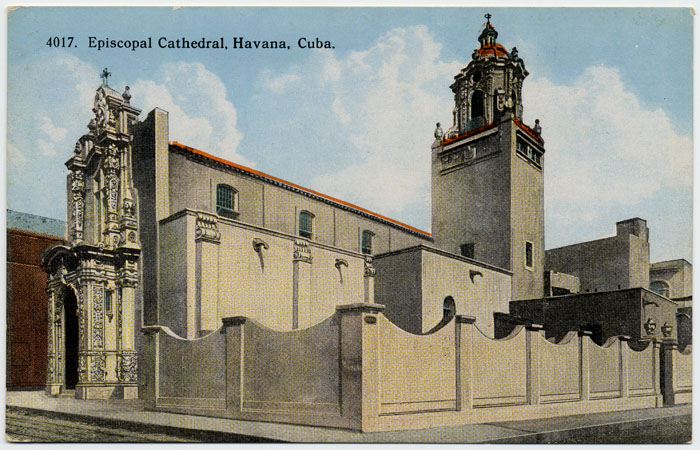 This is the thirteenth post in Blue’s Clues, a series on the resolutions and reports of the Episcopal Church’s General Convention. The index of posts is here, and my index of resolutions and likely votes is here.

Back in the day, Anglicans in Cuba were organized as a diocese of the Episcopal Church. But in the 1960s, the communist government there closed and appropriated schools. Then in 1966, the TEC House of Bishops voted to sever ties with Cuba. I knew Cuba had been part of TEC, but I did not realize, until reading this report, that it was the bishops of the Episcopal Church who ended ties.

Since that time, Cuba has been an extra-provincial church jointly overseen by a council consisting of the Primate of Canada, the Archbishop of the West Indies, and the Presiding Bishop of The Episcopal Church. Recently, there has been a desire among many people in the USA and in Cuba to reunite. This is a super-complicated matter, and it’s a good example of the sort of thing that deputies and bishops will be expected to vote on with little grasp of the subtleties of the situation.

So what are we to do? I trust our churchwide leaders, and I know they’ve consulted broadly with the other churches involved (The West Indies and especially Canada). Lots of conversation has happened with Anglicans in Cuba. And of course the task force itself has done a great deal of work, as you can see in their report. Look at the roster of the task force, and you’ll see some real experts with decades of involvement. On this particular complicated issue, I’m trusting the task force.

Now, that said, I started off a little skeptical of this enterprise. TEC’s relationships with other nations in the region are…complicated. Our church’s footprint is largely the result of the ambitions of a USA empire, especially from the 19th and early 20th centuries. The legacy of this colonial dynamic lives on, unfortunately, more often than anyone would like to see. I do believe the best outcome, long term, is for most of the national Anglican groups to become self-sustaining churches without dependency on the USA. But it’s a process, and in several places, progress is happening at a good pace.

So it concerns me a little to put Cuba into a relationship with the Episcopal Church (which is, if we’re honest, mostly a USA church plus former colonies and outposts). This will be fraught. However, the good that will come from a renewed relationship with Cuba outweighs the risks and negatives, I believe. Cuba has been isolated for decades, especially from the USA. (Though it surprises many folks in the USA to learn that it was cool to travel to Cuba from the rest of the world while our own government maintained an embargo.) When Cuban Anglicans are part of a new church structure, those relationships will enrich the nations of TEC, including Cuba. After decades of government constraints, the church can be restored such that it will be healthier and could eventually become autonomous and self-sustaining.

One wrinkle is that Cuban clergy lost pensions in the 1960s, and they have not had the opportunity to accrue retirement benefits since then. So part of restoration is funding pension obligations for Cuban clergy. The report estimates this will cost $801,000 (it’s so low because clergy income is low). While that sounds like a lot of money, it is not a huge sum, and we do not have to fund the liability all at once.

My support of this work relies on my understanding that the Cuban church is thoroughly desirous of this happening. My hope is that General Convention will reciprocate this desire by moving toward reuniting as soon as practicable. I also hope that recent relationships with Canada and the West Indies will not end as Cuba draws closer to the Episcopal Church.

One important caveat: to elaborate a bit on what I said above, this is a fairly complicated matter about which I know little. My opinions rely on various news articles I’ve read over the years, the stories I’ve heard from folks who have visited Cuba, the conversations I’ve had with Cuban-Americans, and from the task force’s work. If I’ve gotten something wrong here, please do leave a comment or contact me.

Do read the report. And here is my take on the one resolution.

I would have expected some clearer language, “the church in Cuba will be welcomed as a diocese on [date]” or that sort of thing. Apparently, it’s not exactly clear what the precise status is (this is my rough summary, so pardon me if I’m being crude) of the separation and reunification. I suspect this resolution does what it needs to do, which is to declare the intention. Presumably lawyers will get to work, and any necessary resolutions for further, specific action can be passed at Executive Council.

There is also no mention of the price tag of the pension liability in the resolution, though it does say that “effective the conclusion of the 79th General Convention, the clergy of the Diocese of Cuba shall be eligible to participate in The Church Pension Fund International Clergy Pension Plan.” Again, my guess is that the $801,000 mentioned in the report is a close approximation, and it will take lots of work to get the exact figures. No reason to hold off on reuniting and sorting out pensions while we tally dollars and cents, as long as we’re pretty confident we’re close.

Lastly, the resolution asks for “the formation of a 3-year interim body to accompany the Diocese of Cuba as it fully integrates into the Episcopal Church.” This seems reasonable and even necessary.

As readers will know, I serve at Forward Movement, and we produce lots of Spanish-language resources. I am eager to learn how we can welcome our friends in Cuba into the Episcopal Church, and how they will welcome us into their lives in Cuba.

My hope is that this resolution is passed and that our churches reunite for the glory of God and so that we may together proclaim the Gospel of Jesus Christ.