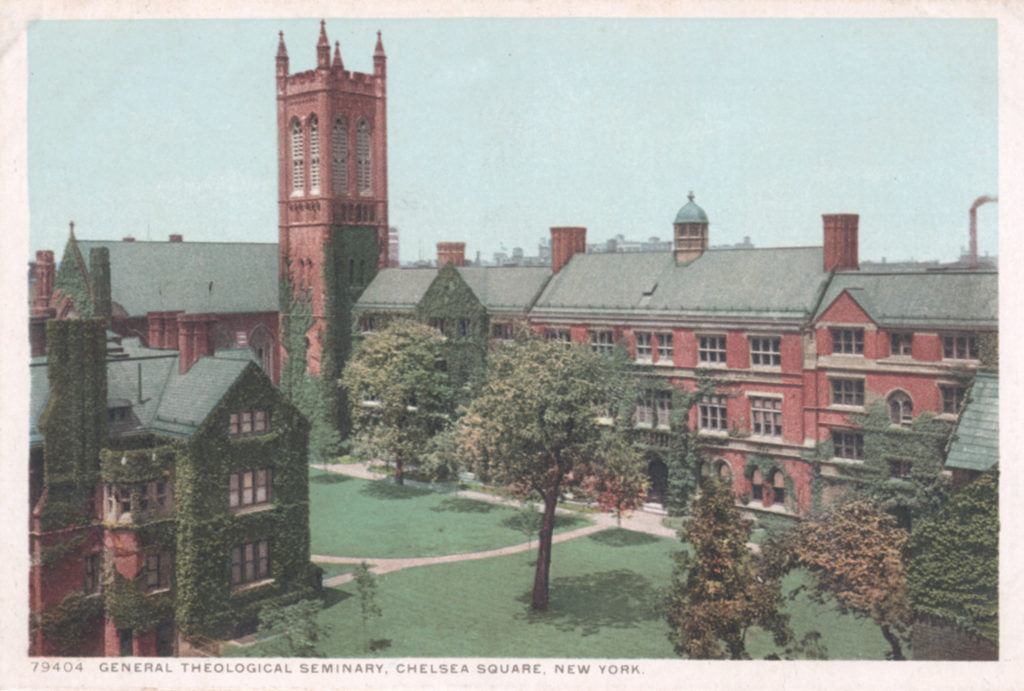 This is the eighth post in Blue’s Clues, a series on the resolutions and reports of the Episcopal Church’s General Convention. The index of posts is here, and my index of resolutions and likely votes is here.

I am reminded of a digression I once took in a blog post about the General Ordination Exam:

Why must so many things in the Episcopal Church have the word “General” in the title? General Ordination Examination. General Convention. General Board of Examining Chaplains. The General Seminary. The General Thanksgiving. The General Confession. I’m surprised we aren’t required to buy things from General Electric. I think we should go one of two ways. Let’s either go whole hog and name everything with General in the title (“Could you hand me the General Flagon so I can pour some General Wine into the General Chalice? Yes, General.”) or let’s maybe be just a wee bit more creative.

But once again, I have digressed — this time by quoting a previous digression. Mea culpa.

Back to the committee. Like many things General Convention does, the real impetus for action is not evident at first glance. This was not undertaken as an abstract exploration of the historical and future relationship between GTS and General Convention. As the committee itself acknowledges, the real impetus was the scandal and controversy of 2014. If you aren’t familiar with these circumstances, you can read coverage in the Washington Post or at the Episcopal Cafe (here, here, here, and here, to give a random selection). The committee notes that the enabling resolution (2015-D075) did not ask them to revisit these events, so they did not. Fair enough.

However, they did take it upon themselves to engage in a redefinition and expansion of accountability and authority for all theological education / seminaries in the Episcopal Church. Hmmm. Let’s go back to the report.

I applaud the committee’s data-gathering efforts. They prepared a survey and circulated it widely. They met with key stakeholders at GTS and other seminaries. They contacted others by phone. Seriously, it’s an impressive amount of careful work. And what did they learn?

“This Committee concludes that the relationship between the General Convention and the General Theological Seminary is not mutually beneficial.”

I’m shocked, shocked I tell you. I don’t think anyone expected they’d find something different, but it is worth the time to investigate and not assume a conclusion. Please do read the whole report for specifics about why the relationship is not beneficial, both from the perspective of GTS and from the perspective of General Convention. They also note some ways things could be better.

For what it’s worth, I think that unless General Convention is going to provide funding, it’s hardly fair to attempt to exercise oversight. Otherwise, what’s the benefit to the seminary to agree to come under authority? Right now, all the seminaries other than GTS are independent (more or less). We certainly could go the route of nearly every other denomination and fund theological education at the denominational level, which would then justify some oversight. But we’re not going to do that. We can barely afford evangelism after we pay for administration and governance, so we’re certainly not going to take on the additional and considerable expense of theological education. (Prove me wrong, bishops and deputies, please!)

The committee then makes a series of recommendations for all seminaries. They suggest a staff position at 815, a new standing committee, relationships with all seminaries and General Convention, and a budget line for theological education. They also then recommend implementation of their one resolution, which creates a study committee. If we were going to do any of this, shouldn’t we study it first? And by what means, exactly, does the committee hope these other things will happen without a resolution? And the budget line is not going to amount to much, alas.

There are a couple of strange things about their recommendations. First, they take the current (flawed) model of an unfunded mandate from Convention and seek to apply it to all seminaries. Again, I ask, what’s in it for a seminary to have a connection to General Convention if there’s not significant funding? The committee suggests that seminary boards and deans report annually to Executive Council, as if Executive Council has time for more reports. Second, they do all this, in part, to foster communication among seminaries, as if there aren’t already regular meetings among seminary deans? I think this is a “problem” that has already been solved, and thus which does not need a “solution.”

I do think the landscape of theological education is shifting rapidly. We certainly need to learn to educate clergy and lay leaders in new ways. I am unconvinced that staff positions at 815 or General Convention committees or mandatory reports from seminaries to Executive Council will help in that process. In fact, I think these processes could encumber seminaries and create extra work that does not foster the creative future they need to discern. Simply put, unless the Episcopal Church decides it’s worth investing in theological education in a big way, I don’t think there’s much advantage to creating centralized structures.

My hope is that we’ll cut GTS loose, and free them to work within their system to achieve a sustainable, dynamic future. I think at some point, it may make sense for churchwide structures to get involved in seminary education, but I’d like to see that request come from seminaries. And, meanwhile, places like the Kemper School, the Iona School, and CDSP’s low-residence M.Div. programs are on the vanguard. They may work, or they may not. But they are attempts to explore different models from the current status quo.

We know the GTS / General Convention model doesn’t work, and we have the data to prove it. Let’s not apply that model elsewhere. Meanwhile, let’s watch for innovative work as it bubbles up from the grass roots. At some point, I hope we might find funding for block grants to encourage innovation, but I hope we will not imagine that committees, staff positions, and regular Council reports are the way forward.

As I said, the committee “makes recommendations” in their report, but the one resolution they’ve submitted only proposes a study committee. So I’m not sure what we readers are supposed to do with recommendations. If we need to take action to sever ties with GTS, I hope someone will craft that resolution now, so that we can free GTS immediately.

On to the resolution.

A007: Proposing the Establishment of a Committee to Study the Relationship of Episcopal Seminaries with the General Convention, One Another and the Wider Church. Full text. Likely vote: NO.

This resolution creates a committee to do just what its title says. The legislative committee to which this is assigned is going to have a LOT of work to do. The resolution fails to follow the helpful guidelines for how to write resolutions. Aside from the Whereas clause problem (which I actually thought were forbidden, but which are apparently merely discouraged), the resolution does not specify the make-up of the committee, though they mention some of this in notes after the resolution. The committee is also meant to finish in 2024 with a report to the 80th General Convention in 2021. Again, I don’t think a task-focused committee can be created to span triennia, but I may well be wrong. Six years is a long time, by the way.

In any case, the scope of the committee’s work is wide. It goes from “Reviewing seminary budgets and curriculum” to “Surveying the student bodies to determine size and diversity.” In fairness to my criticism above, the committee does request that the committee consider, “Providing funding from the General Convention budget to be allocated for the work of seminaries.” But I literally cannot comprehend how that would happen. And I mean literally, literally.

There are other mandates. Nothing is objectionable here. The committee has articulated important things that demand our attention. But I guarantee you, every seminary and every alternative theological educational institution is already working on this. I cannot see the value in a committee here, other than to create a committee. And long-term readers of 7WD will know, I am skeptical of new churchwide committees.

The funding request is for $33,000 per year. Over the proposed six years, that’s $198,000. There are many things I’d rather see us spend $200k on than this. It’s not that I think the topic isn’t important. It is! It’s that I don’t think a committee is going to tell us things that others aren’t already telling us.

If I’ve completely missed things, do let me know.

And I suppose I’ve ruined any chance of Blue the dog from getting an honorary doctorate, or maybe that would have been a dogtorate.