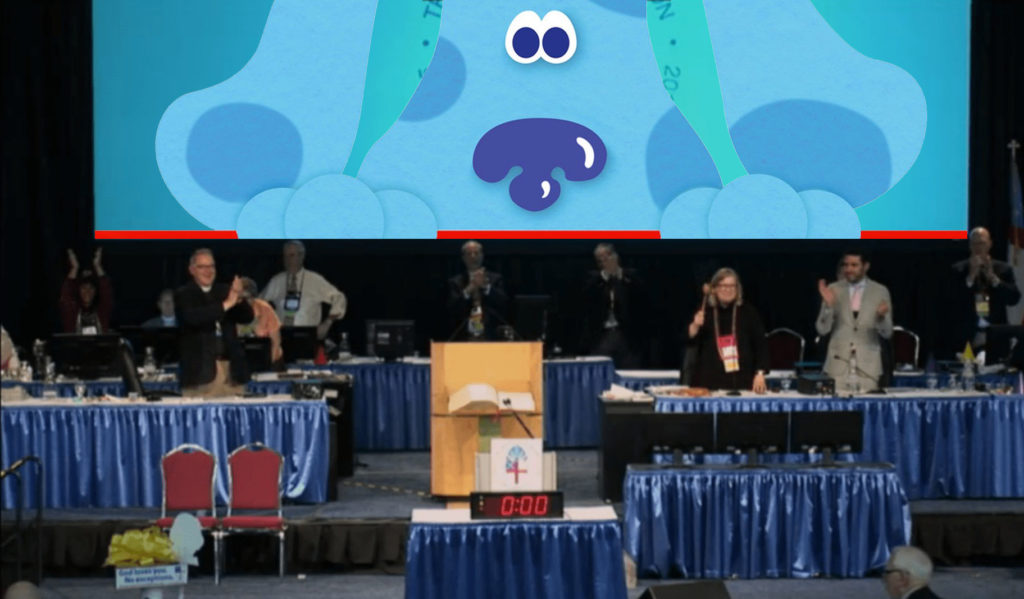 If you are a church geek, I have good news. This blog is about to begin an epic exploration of resolutions proposed for action by the Episcopal Church’s General Convention, set to take place in Austin, TX this July. As long-time readers will know, this is not my first time at this particular rodeo (hey, I’m trying to enjoy the Texas milieu).

As you may know, the official reports of official committees and such are put in a book colloquially called the Blue Book. In the past, it has not always been blue. More recently, it’s not always clear it’s going to be a book. This time, I believe it will be both blue and a book. You can also read everything online. (This page has links to various General Convention resources, including the online resolutions.)

In 2012, my series was titled simply, “Blogging Blue.” Last General Convention, in 2015, my series was called “Tangled Up in Blue.” This time, I crowdsourced the name on Facebook. A couple of people suggested “Blue’s Clues,” a name I had already been thinking about. Lisa Barrowclough was the first to suggest it, so email me, and you can collect a prize. I’ll send Lisa a copy of the newly published book I co-authored with Melody Wilson Shobe, Walk in Love: Episcopal Beliefs & Practices.

In any case, Blue’s Clues is the name of this year’s series. Thanks to a friend who prefers to remain anonymous for the Photoshop help with the illustration. That’s a photo of the closing of the 2015 General Convention with the Blue’s Clues dog peering at the House of Deputies on the big screen. I pilfered the photo from the Diocese of Fort Worth website, I think.

By the way, there were other excellent suggestions. I loved Jesus Bluevement. Wild Blue Yonder is a good one. “Scott Gunn and the Big Blue Ox” is great, but a bit unwieldy. Check out the post on Facebook for the full list (173 comments!).

My intention in this series is twofold. First, it helps me in my own careful reading of the reports and resolutions. In a sense, these blog posts are my notes, to which I will refer when I am serving as a deputy this summer. Second, I hope this might be useful to other deputies, bishops, and observers. Often, very brief resolutions have a back story that’s not readily apparent. I’m no expert, but sometimes I know the back story — or potential side-effects — and I can share them. For what it’s worth, I’ll share my thinking about why I’m likely to vote for or against a resolution. My hope is that you, dear reader, will comment here regularly, because I often learn a great deal from the comments. Sometimes this leads me to change my thinking entirely.

I am NOT telling anyone else how to vote. If you are a deputy or a bishop, you’ll need to do your own work to figure out how to vote. This is how I think I’m likely to vote, based both on the information I have and on the text in front of me. Between now and voting time, I will certainly learn things, and the resolutions themselves will change. So, it’s not just that I’m avoiding telling others how to vote, but even that I will surely vote differently based on better information, insights gained in conversation, revised text, and, perhaps most importantly, prayer.

Much of the time, I’ll try to give a sense of why someone might differ from my view, but I am not pretending to be unbiased. I clearly do have biases, and here are a few of them:

I favor resolutions that are

I tend not to favor resolutions that are

Here’s another set of biases that given my approach: I call myself an orthodox Christian, meaning that I say the historic creeds, celebrate liturgies of our church, read scripture, and proclaim the Good News of God in Jesus Christ without irony and absent any crossed fingers. Now, that said, I am quite liberal on political and social issues. So at times, you’ll see conservative (in the old-fashioned sense), progressive, and traditional views here, sometimes mixed up together.

My sense is that General Convention spends too much time on fairly pointless legislation, so I’ll be likely to vote against a fair number of resolutions. Last time, I thought I would vote yes on 52% of resolutions and no on 48%. This is a shift from 2012, when it was 65% yes and 35% no. I’m not sure if I got grumpier, or if the resolutions were different.

Under the rules of the House of Deputies, abstentions are not allowed. So if there is a resolution that causes a material conflict of interest with my work, I will request permission to abstain from voting, or I will absent myself from the floor during the vote. Last time, there was one resolution which charged Forward Movement with hosting an evangelism summit. While I dearly wanted to vote yes, I requested — and was given — permission to abstain from that vote. (An awesome fun fact: while the House of Deputies is in session, you can communicate with the parliamentarian and legislative staff via Twitter. That’s how I asked for and received my permission. Church geekery zenith.)

When you read blog posts or social posts urging support or rejection of particular pieces of legislation, I urge you to consider who is saying what, and why they might be saying it. Sometimes people have (undisclosed) interests.

We are almost done here. I want to note one more thing. I love General Convention. To be fair: I don’t always love the way we run it, and sometimes I don’t agree with the decisions we make. But I love how it embodies some deeply held values of the Episcopal Church.

As I wrote last time, you can expect several things in this series.

And that’s it. I welcome suggestions and questions in the comments. Sometime in the next few days, look for the first of what should be twenty or more posts on Episcopal Church legislation.

Church geeks of the world, unite!