Of plentiful harvests and vestigial polity 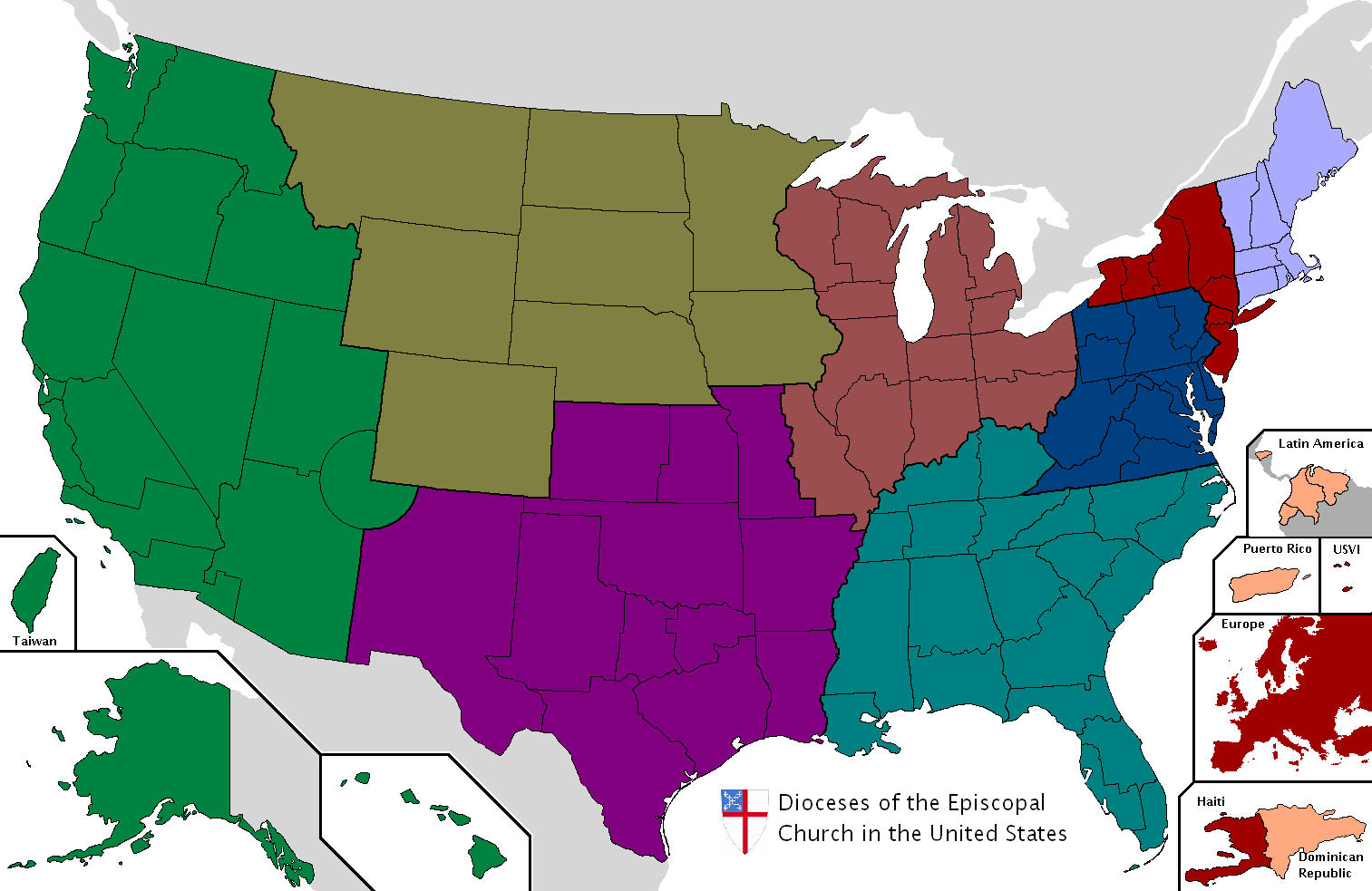 This post is for serious Episco-churchgeeks with a speciality in polity wonkery. If that’s not your thing, move right along, and we’ll be back to our usual muttering about discipleship in no time at all. But if you want to dive into the realm of Episcopal governance and structures, this will make your day…

OK, if you’re still here, you doubtless followed General Convention 2015 and its considerable energy for rethinking church structures. This blog was thick with non-stop convention geekery. The idea is that we need to streamline and rethink how our church is run and governed to meet the needs of today’s church in today’s world. Leading up to General Convention, the Task Force on Reimagining the Episcopal Church presented a set of proposals. They had some good ideas, but a few of us wanted to take things a bit further in a few cases. So I worked with my friends in the Acts 8 Movement to present our own set of proposals for rethinking and streamlining, which we hoped would allow us to focus less on institutional maintenance for its own sake and more on discipleship.

In our group’s division of labor and legislative strategy, my name was attached as the sponsor of a resolution on provinces. The original title of the resolution aptly says what we were thinking, Eliminate Provinces. On the one hand, this seemed like an easy win. Here, we thought, is a layer of polity that our church manifestly doesn’t need. If we’re keen to simplify and rethink, this is a prime example and a good place to start. On the other hand, I fully expected the province resolution to die in committee, because people love the idea of change even while they hate actual change. Much to my surprise, the resolution passed in the form of a substitute calling for a task force to study what it might be like to eliminate provinces. So I count that as a win: our church is having a conversation that we needed to have. Now it’s time to decide what to do about all this.

A few days ago, I spoke with a member of the task force who are working on this. Their task is to make a report that will, no matter what they say, please some and annoy some. It’s thankless work, so I want to begin by thanking them. They’ll make a recommendation for General Convention 2018, and then the legislative process will do…something.

What I’d like to do here is, firstly, to make the case for why I think we should jettison provinces as a layer of polity in our church. But secondly, and most important, I want to invite you, dear readers, to weigh in with comments. I’m speaking with the task force soon, and I’d love to point them to what folks have to say. So please leave comments here with your thoughts on why provinces are awesome, meh, or deplorable. 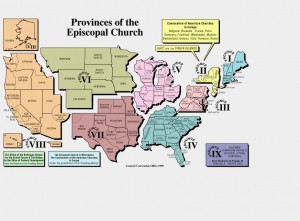 Those of you who have made it this far probably already know that our church is divided into nine provinces, or clusters of dioceses. While our nine provinces certainly do some good, they also add a layer of polity that we should be able to trim way to free up resources of time and money for other work. It’s important that no one think that I or anyone else would say provinces do no good. Rather, the opportunity cost of keeping them is higher than what they accomplish; much of the good provinces now offer does not require a layer of polity.

Getting rid of provinces isn’t the be-all, end-all of structural reform, and it won’t cause a sea change in our church. But it should be an easy way to make headway on organizing ourselves for this century, continuing what is good, and trimming what is not necessary. From my perspective, being good or familiar or comfortable is not sufficient. We need to keep those things which are essential, and hold all else lightly.

First, the good. Our nine provinces offer a good vehicle for regional gatherings. I used to enjoy Province I gatherings when I lived in New England. Provinces provide an easy way to convene people across several dioceses. Provinces are also good for building regional networks. Youth ministers or commissions on ministry or even bishops can gather more easily because travel costs are lower, and they can share resources.

It should immediately be noted that all of those things could happen even without things called provinces. New England Episcopalians could get together without a thing called Province I. Youth ministers in the upper midwest could meet online or in person without being in a province.

Provinces also help us fill churchwide committees, but that’s not a good thing. There’s a rule now that if a committee has more than nine people on it, one person should be from each province (except, ironically, the task force on provinces was constituted without reference to people being from each of the nine provinces). Why do we mandate a strict quota system for geography, but not for other kinds of diversity? In other words, since we trust our presiding officers to appoint people of varied race, sex, sexual orientation, gender identity or expression, etc., can we also trust them to seek geographic diversity? In our current system, we end up with some comically large committees. The nominating committee for a presiding bishop is 29 (!) people. That’s one bishop, one deacon or priest, and one lay person from each of our nine provinces, plus two youth representatives. Maybe we should instead decide on the optimal committee size and work on geographic (and other) diversity in appointments.

In some dioceses, provincial synod (that’s like a regional general convention) members are constituted from people who are elected by dioceses. In some dioceses, synod members are appointed. In others, they are grafted into synod by virtue of, for example, being elected deputy to General Convention. A few dioceses do not appear to specify how provincial synod members are appointed/elected. And then these synods elect Executive Council members. So in some cases, we have unelected and opaquely-made appointees electing members of our church’s board. This goes against the core values of transparency and participatory democracy that our church holds dear.

There is also an issue of time. Some provincial synods meet a couple of times a year, and a room full of people spend a day or two in these meetings. Who has the free time to attend these meetings, at least if you are not employed by the church? What is the result of these two-day meetings? How do those meetings proclaim the kingdom of God? How else might we spend our time? At the churchwide level, the cost of provinces is not high, perhaps in the low six figures. But if you add up all the costs of all the meetings, it becomes more significant. It would not be an unreasonable estimate that provinces consume over a million dollars each year.

I had a chance to visit Province IX (the province that encompasses Central and South America, plus some other bits) a couple of years ago when I went with some staff members of the Episcopal Church to visit the diocese of Ecuador Central. First of all, I was exceedingly impressed by the effort to provide resources from the whole church to address some local challenges. These are deep, real relationships, and I was blessed to see the fruits of these relationships as a diocese — which has a long history of various challenges — works toward health. Part of the goodness of what’s happening in Ecuador is a network of relationships with the other dioceses of Province IX (Colombia, Dominican Republic, Litoral Ecuador, Honduras, Puerto Rico, and Venezuela). There is a great deal of resource sharing and mutual support among these people, and the churchwide staff are able to target resource development at a group with broadly similar contexts. Any reform of provinces would necessarily keep these networks and targeted resource development. The good work and the great momentum (as these dioceses work toward sustainability) can continue without a thing called Province IX.

So why get rid of provinces?

Setting aside the idea that the burden should be on those who advocate structural maintenance in our day, I think there are several compelling reasons to get rid of provinces.

Provinces are a horse-and-buggy solution to modern challenges. How can we have networks that are larger than dioceses but not encompassing the whole church? Transport is easier now. Online networking is easier now. We can build the networks we need without resorting to structures that are otherwise unhelpful. We can build networks from the grassroots, without being told who to connect with. We can still gather for face-to-face meetings when we want to, but with greater flexibility.

This is the explanation from the resolution I submitted to General Convention last time.

First established over a hundred years ago after decades of discussion, provinces have served their useful purpose. In today’s age of easy travel, we wish to open up collaborative possibilities beyond the constrained boundaries of provinces, to permit shared ministry across current lines, if desired. This layer of denominational structure serves little purpose today other than to ensure geographic diversity on certain committees. We believe that we can ensure continued geographic diversity without rigid lines, similar to our current practice of seeking diversity of race, age, sex, sexual orientation, and gender identity or expression. Interest-based provincial networks, such as young adult gatherings, deployment officer gatherings, etc., can continue to meet under this change; there is nothing that requires a governance structure to exist in order to allow an affinity group to meet. Removing the provincial structure allows such affinity gatherings to choose the geographic groupings that make the most sense in their context. This change will free up resources currently spent on maintaining an outmoded structural model.

At the same time, we wish to acknowledge the good work of the dioceses in Province IX, and the particular circumstances of our international dioceses. This resolution calls for their continued support, and for our Presiding Officers to continue to include participation from dioceses outside of the United States in the church’s committees and commissions.

Since Title IV currently uses a Provincial Court of Review, we propose the creation of a single churchwide Court of Review. We believe that a churchwide court will be an equally satisfactory alternative to the current structure.

Eliminating provinces also allows the numbers of members on certain committees to be adjusted, since provincial representation is no longer needed. Specifically, we propose to change the following:

You can see the full text of the original resolution here.

No one is suggesting that we should eliminate provinces because they are bad. In fact, they have done plenty of good. I happen to believe that they are vestigial — left over solutions to 19th century problems of convening our church more often. By eliminating these vestigial structures, we can streamline — while accomplishing the good work of provinces — and free up time and resources for discipleship and evangelism. Put another way, the field is ripe for harvest. Do we need provinces to send laborers out into the harvest? Are provinces consuming time and energy that delay us from the urgent work of the Jesus Movement?

What say you, dear reader? Should provinces stay or go?