Tangled Up in Blue: Rules of Order

This is the twenty-first post in a series on resolutions for General Convention 2015. See also the index of resolutions and the list of resources related to #GC78.

We made it! This blog post covers the final resolution in the Blue Book. If you are a parliamentary procedure nerd or a church wonk, I have saved the best for last. This is the report of the House of Deputies Study Committee on the Rules of Order. 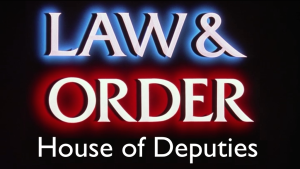 Our current President of the House of Deputies, the Rev’d Gay Jennings, has expressed her desire to reform the way the House of Deputies does business — and also to work for General Convention as a whole to legislate more efficiently. Some of this work can be done simply in the way the PHoD carries out her work. Much of the reform effort relies on streamlined and revised Rules of Order for the House of Deputies. While it sounds as exciting as watching paint dry, it’s actually pretty interesting stuff. I can tell you right now, I’m disappointed Gay didn’t take my suggestion to put in a provision for a trap door under the speaking platform to be employed against wayward deputies.

If you want to see what the new rules are about, the committee put a summary of its work online back in December. It’s in plain English, so even someone who hasn’t yet memorized Robert’s Rules can read this and comprehend what’s being done. For even more detail, have a look at their report in the Blue Book, which has both the actual rules and a whole bunch of explanatory prose.

This replaces the current Rules of Order for the House of Deputies with new rules. This is not a slight tweak, but a complete replacement. Generally the aim is both to simplify how business is done, clarify procedures, and use plain English rather than parliamentary jargon.

In general, there is more flexibility in the new rules, because fewer things are specified precisely. I think that’s good. Lest someone worry that we’re compromising the democratic process, the answer is clear. There are 800 deputies who will quickly change the process if it’s not working. Let’s trust each other and our new rules. If this works, it’s a great leap forward. If it doesn’t quite work, we can tweak the rules. We’re approving them, not carving them into stone.

These are examples, and there are many other improvements and tweaks. I have not done an exhaustive point-by-point comparison between the old rules and new rules, but the few places I checked seemed to protect due process while modernizing practice and creating flexibility.

I do have a few minor concerns and questions, but I fully trust the legislative committee which will look at these rules to sort this stuff out.

The new rules, in order to be easy to read and quickly referenced, are in outline form. The old rules were mostly in prose form. While I fully support the change, some part of me will miss some of the old language. An example from under the old rules:

As an indication of our humble dependence upon the Word and Spirit of God, and following the example of primitive Councils, a copy of the Holy Scriptures shall always be reverently placed in view at the meetings of this House. This rule is to be carried into effect under the supervision of the President and Secretary of the House.

Here’s how that reads in the new rules.

The same thing is achieved. I know that we are still dependent on the Word and Spirit of God and do not need to state that. Just noting that I will miss some of the flowery language, the same way I sometimes miss the ink-stained fingers from reading a newspaper.

I think the committee who worked on these rules deserve our great appreciation, as does Gay Jennings for her vision. Thanks to their efforts, we’ll be able to focus more on business and less on the mechanics of business. That is surely a great gift to the House of Deputies and through our improved work, to the church.

When I vote yes on these new rules, I will do so in gratitude for the hard work of our leadership team in advance of this convention to change how we govern ourselves to give us more time to do our work and less time on pointless overhead.