Of the readings for Holy Week

My ad hoc series on Holy Week liturgies continues (see here and here). I realize this is too late to make much difference this year for folks, but perhaps some useful conversations will ensue.

Seriously, this one is for liturgy geeks. Others can move right along… 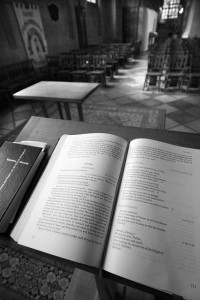 I’ve had two conversations with friends recently in which some confusion was expressed about the proper readings for Holy Week. It’s understandable that there would be some confusion, because the Standing Commission on Liturgy and Music for the Episcopal Church has introduced a bit of a mess with the Holy Week readings.

Let’s back up and see how we got to where we are, and that will allow us to see how to fix the mess. For most Sundays and Major Feasts, the readings are listed in the back of the Book of Common Prayer in a lectionary beginning on page 888. Keeping the material outside the “business part” of the prayer book allows the lectionary (in further confusion, this is called the “Table of Lessons” in our church’s constitution, see Article X) to be revised easily at General Convention, in one sitting. The prayer book itself requires two meetings of General Convention and a more rigorous voting process. So the framers of our prayer book intended that we would not revise the prayer book lightly, but the framers did make it not too difficult to update the lectionary. So far, so good.

A few conventions ago, we began to experiment with using the Revised Common Lectionary for Sundays (and some Major Feasts). The idea was that we Episcopalians would share the same readings as many other Protestant churches and also be quite close to what the Roman Catholic church is using. Of course, we decided that the regular RCL wasn’t quite fit for purpose, so we adopted our own unique version of the RCL, which kind of defeats the point of “Common” but never mind.

For a while, our official lectionary was the Book of Common Prayer lectionary, but one could ask to use the RCL. Then in 2006 we swapped that at General Convention. For a bit, one had to use RCL on Sundays. Now one must use the RCL unless one requests permission from one’s bishop to continue using the BCP lectionary for Sundays. (Thank you, Bishop Dan Martins, for leading the crusade for that provision.)

But like much other work which has come from the SCLM of late, the lectionary revisions came with their very own mess. General Convention revised the readings for Holy Week in the lectionary, but it turns out there’s a problem. You see, the readings for Palm Sunday, Maundy Thursday, Good Friday, and the Great Vigil of Easter are contained within the prayer book itself. That means it takes two General Conventions to change them. The framers of our prayer book did not intend us to trifle with the Holy Week readings.

So our current state of affairs appears to put the prayer book in conflict with itself. For the major liturgies of Holy Week, we have one set of readings in the book itself and another set over in the lectionary in back. In years past, the SCLM has declared that we should use the RCL readings. But here’s the rub: the SCLM has no such authority.

Until the prayer book is revised, we are meant to follow its rubrics, to use its liturgies, and in this case, to use its lections. There is no provision for a church commission or even a bishop to permit the use of alternate readings for Holy Week. So the actual state of affairs is that the lectionary is errant.

In 2012, the General Convention passed the first reading of prayer book revision in an attempt to fix this problem. This would change the prayer book such that it aligns with the current table of lessons. Of course, it’s not so simple. Once again, we have a mess on our hands. You see, the collects of our liturgies are meant to collect the themes of the scripture readings. And by mucking around with the readings, especially at the Great Vigil, the SCLM has broken the connection between collects and readings. I voted against this prayer book revision last time, and I will vote against it in 2015 as well.

There are two ways to fix the current problem.

First, we could reject the proposed prayer book revision and, in fact, roll back the Holy Week lectionary changes at General Convention 2015, so that the Book of Common Prayer lessons are used in Holy Week. The BCP readings are similar to RCL readings, but they actually hang together a bit better with our liturgical material and have a tighter internal coherence, at least in this priest’s view. Keeping the current Holy Week readings is my preferred option.

Second, we could proceed with prayer book revision, but only when we also provide different collects that match the readings. In other words, if we’re going to get out the scalpel, let’s make sure we heal the problem instead of blindly cutting around. Without changing readings and collects for Holy Week, we will continue to have a mess.

For now, it’s actually quite clear what readings we are meant to us. The prayer book’s rubrics take precedence over canon and even the lectionary. The only correct readings for Holy Week are the lessons found in the Holy Week liturgies on pages 270-295.

I’ll have more to say about the SCLM’s proposals for this year’s General Convention in due course. If asked, I could also say more about why I generally think the BCP lectionary is preferable to the RCL lectionary.

To be sure, whether we use the BCP or RCL lections, we will have a blessed and sacred journey through Holy Week. The differences between the differing sets of lections are, in some ways, not enormous. Still, this is an important matter of church discipline. This conversation is about, among other things, our commitment to common prayer. I for one hope our church will treasure and delight in our Anglican habit of common prayer.