John 5:33-35
You sent messengers to John, and he testified to the truth. Not that I accept such human testimony, but I say these things so that you may be saved. He was a burning and shining lamp, and you were willing to rejoice for a while in his light. 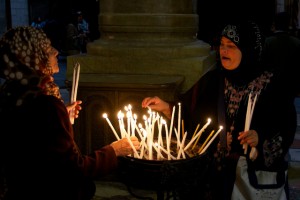 From St. Augustine’s Homilies on the Gospel of John (Tractate XXIII)
And lest thou shouldst say, How was he not the light, of whom Christ says that “he was a lamp”? — I answer, in comparison of the other light, he was not light. For “that was the true light that enlighteneth every man coming into this world.” Accordingly, when he said also to the disciples, “Ye are the light of the world,” lest they should imagine that anything was attributed to them which was to be understood of Christ alone, and thus the lamps should be extinguished by the wind of pride, when he had said, “Ye are the light of the world,” he immediately subjoined, “A city that is set on a hill cannot be hid; neither do men light a candle and put it under a bushel, but an a candlestick, that it may shine on all that are in the house.” But what if he did not call the apostles the candle, but the lighters of the candle, which they were to put on a candlestick? Hear that he called themselves the candle. “So let your light shine,” saith he, “before men, that they, seeing your good works, may glorify,” not you, but “your Father who is in heaven.”

Reflection
We Episcopalians don’t say much about our faith. This is true not just when it comes to strangers, but within congregations. By and large, we simply don’t share our spiritual journeys with one another in conversation. That’s too bad. Our refusal to share the light of Christ means that darkness persists where the gloom could be dissolved by God’s radiant love.

Part of the Christian vocation — as the Gospel according to John and then St. Augustine remind us — is to be bearers of the light, to let that light shine before others. Somehow we think we shouldn’t share our good works with others, lest we be boasting. But St. Augustine rightly reminds us that it’s not about us. In sharing our good works — and, I would say, our joy in faith — with others, we are really showing forth Christ’s light working in us.

We are not the light, but we are lamps in which the light burns. Let us, like John the Baptist, testify to the truth. Let us be bearers of light to a world in need of light. Let us allow the light to shine in us, so that we might glorify our Father in heaven.

“So let your light shine,” saith he, “before men, that they, seeing your good works, may glorify,” not you, but “your Father who is in heaven.”