Palm Sunday: The collision of hope and fear

A couple of days ago, Palm Sunday, I preached at Christ Church Cathedral in Cincinnati. A few people asked me about my sermon text, which I didn’t have, since I preached without notes. As best I can remember, this is what I said.

Also, up through Palm Sunday, I had been putting a scripture, an image, and a prayer here every day. I’m not doing that in Holy Week, obviously. If you like that sort of thing, head over to the most excellent blog of Penny Nash, which you should be following in any case. Anyway, my sermon is below.

When the Centurion saw what had taken place, he praised God and said, “Certainly, this man was innocent.”

Each of the four Gospels tells the Passion story in a slightly different way. St. Luke takes great care to point out that Jesus was innocent. While other Gospels have the centurion saying Jesus is the Son of God, it is Luke who puts the word “innocent” into the centurion’s mouth. In Luke’s version, Pilate does every possible thing to get Jesus out of condemnation, but events are out of control. 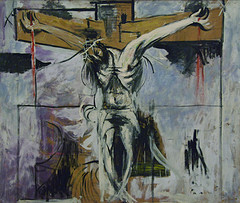 Luke is also the only Gospel which tells us that the sun was darkened as Jesus died. For Luke, the Passion — this collision — has cosmic significance. The Passion is the result of a cosmic collision between hope and fear. The Cross reminds us this collision. Over twenty centuries, we Christians have gotten in wrong much of the time.

Too often, we reduce the Cross to a bumper sticker. “Jesus died for our sins.” “With the Cross, the debt of sin is paid.” These are merely caricatures, and like good caricatures, they are true but show only a partial and distorted picture. We have to know more of the complexity of the Cross to understand it.

Too often, we have used the Cross to scapegoat particular people for Christ’s death. But the reality is that the Passion is the collision of God’s perfect love and our human sinfulness. It was not one group who killed Jesus, but rather humanity as a whole. Any of us sinners could have done this.

Too often, we have distorted the Cross to sanctify suffering, as if God wills us to suffer. My reading of the scriptures suggest that suffering is never God’s desire for us, but that God does promise to be with us when we suffer. Far from being a sanction of suffering, the Cross is our rescue from it.

The collision of hope and fear was inevitable. This Cross, then, stands as a warning to us. Now we know what might well happen when hope and fear meet. Two thousand years of Christian martyrs — witnesses of God’s love and hope — bear testimony to the reality of this warning.

But the Cross is also a promise. We know how the story turns out! You can almost smell the lilies and hear the glorious music! Today we gaze at the Cross, but Easter is coming!Hope and fear meet. Jesus is executed, and just when it seems that fear won, God defeats death. Hope wins. Love wins. The Cross, then, is a promise that God’s love will always win, because if God defeated the worst thing the world could do, then God can defeat the challenges we face.

And what of our lives?

I don’t know about you, but I end up in the “safe” procession too often. I convince myself that the reasonable place to be is with the safe people, to be in the procession that makes sense. That’s not where Christians belong.

Which procession will you join?

What would Cincinnati be like if we marched out of here in a procession of hope? What if we acted as if we believe that the kingdom of God is here? What if we stopped worrying about making sense, and started acting like God’s love? It will be dangerous, but there is nothing whatsoever in the Gospel about being safe or taking the easy way.

The Cross is a warning. And we have God’s promise. Thanks be to God.

* = For my awareness of these two processions, I’m indebted to Marcus Borg and John Dominic Crossan, in their little book, The Last Week.

The painting is “Study for Crucifixion” (1947) by Graham Sutherland — in the Vatican Museums. I took the photo, and you can find more photos from that trip on flickr.