Tuesday in the Fourth Week of Lent: Do not be afraid

From the gospel in the readings for the daily office: “But he said to them, ‘It is I; do not be afraid.'” 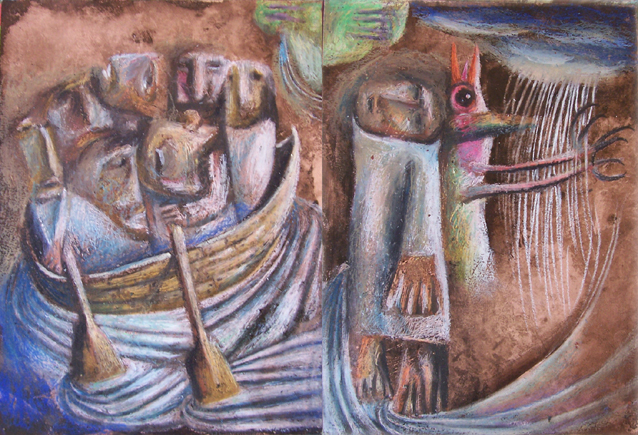 John 6:16-27
When evening came, his disciples went down to the sea, got into a boat, and started across the sea to Capernaum. It was now dark, and Jesus had not yet come to them. The sea became rough because a strong wind was blowing. When they had rowed about three or four miles, they saw Jesus walking on the sea and coming near the boat, and they were terrified. But he said to them, “It is I; do not be afraid.” Then they wanted to take him into the boat, and immediately the boat reached the land toward which they were going. The next day the crowd that had stayed on the other side of the sea saw that there had been only one boat there. They also saw that Jesus had not got into the boat with his disciples, but that his disciples had gone away alone. Then some boats from Tiberias came near the place where they had eaten the bread after the Lord had given thanks. So when the crowd saw that neither Jesus nor his disciples were there, they themselves got into the boats and went to Capernaum looking for Jesus. When they found him on the other side of the sea, they said to him, “Rabbi, when did you come here?” Jesus answered them, “Very truly, I tell you, you are looking for me, not because you saw signs, but because you ate your fill of the loaves. Do not work for the food that perishes, but for the food that endures for eternal life, which the Son of Man will give you. For it is on him that God the Father has set his seal.”

Let us pray.
Almighty God: grant us courage that we might be fearless when we see your power at work. Through Jesus Christ our Lord. Amen.