The Second Sunday in Lent: Growing up and increasing

From the daily office readings for today: “Other seed fell into good soil and brought forth grain, growing up and increasing and yielding thirty and sixty and a hundredfold.” 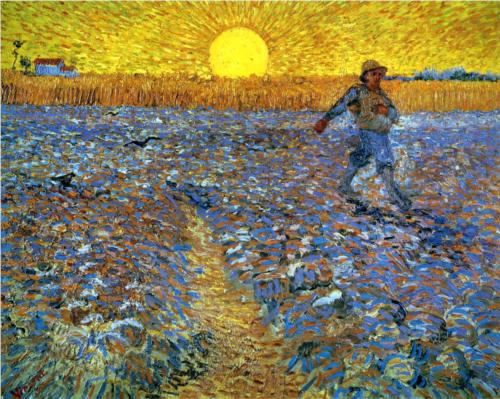 Mark 3:31-4:9
Then his mother and his brothers came; and standing outside, they sent to him and called him. A crowd was sitting around him; and they said to him, “Your mother and your brothers and sisters are outside, asking for you.” And he replied, “Who are my mother and my brothers?” And looking at those who sat around him, he said, “Here are my mother and my brothers! Whoever does the will of God is my brother and sister and mother.” Again he began to teach beside the sea. Such a very large crowd gathered around him that he got into a boat on the sea and sat there, while the whole crowd was beside the sea on the land. He began to teach them many things in parables, and in his teaching he said to them: “Listen! A sower went out to sow. And as he sowed, some seed fell on the path, and the birds came and ate it up. Other seed fell on rocky ground, where it did not have much soil, and it sprang up quickly, since it had no depth of soil. And when the sun rose, it was scorched; and since it had no root, it withered away. Other seed fell among thorns, and the thorns grew up and choked it, and it yielded no grain. Other seed fell into good soil and brought forth grain, growing up and increasing and yielding thirty and sixty and a hundredfold.” And he said, “Let anyone with ears to hear listen!”

Let us pray.
Work in us, O God, that we might be fertile soil, ready to receive your Word. Through Jesus Christ our Lord. Amen.

Painting: The Sower (Sower with Setting Sun) by Vincent van Gogh (1888), via WikiPaintings.