Let all the earth keep silence… 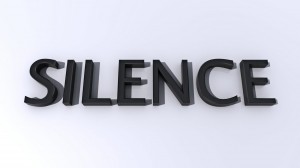 I’ve been thinking about silence lately. It is a challenge for me and always has been. And yet, whenever I manage to pull off a few moments of actual silence, it is a gift. Plenty of studies and anecdotes suggest that I’m not alone in the struggle to achieve silence and in the gift it brings. Our culture is lousy at this.

On a related note, I’ve been pondering liturgy lately, as I’ve mulled over a series of blog posts on various liturgical topics. I don’t think I’ll manage that, but I do think that there is room for some exploration of silence and liturgy together. In particular, I wonder why there’s precious little deliberate silence in most congregations’ liturgies on Sunday morning, at least in my experience. If your church has lots of silence, please do share your story in the comments.

Before I address the why or the possible impact of silence, I’d like to geek out for a second with rubrics. Don’t worry, you can skip down three or four paragraphs if this isn’t your bag.

The Book of Common Prayer suggests silence in several places, especially in the various daily offices. On the liturgies for special days, there are several bits of optional or required silence, particularly on Good Friday. But most of us spend our Sundays in churches who celebrate Holy Eucharist, so let’s talk about that.

Is there room for silence? I hope so. In fact, it is required by rubrics, and I would suggest this silence is necessary for our spiritual good.

In the rubrics of Holy Eucharist, there are three places where silence is suggested and one where it is required. The three suggested/optional places are after the invitation to confession in the penitential order, after the readings (we’re counting this once, but it’s after each reading), and after the invitation to confession if you didn’t use it in the penitential order already. The required place is after the Breaking of the Bread. I quote, “A period of silence is kept.” We’ll set aside the silence that’s included in some forms of the Prayers of the People.

Let’s talk about the Breaking of Bread for a second — and the distribution of communion that follows. Here’s how it works in most places that I’ve witnessed lately. The celebrant breaks the bread. Immediately (or sometimes even slightly before this) the organist begins the fraction anthem, if there is one. Or the celebrant says the fraction anthem the instant the bread is broken. Then there is a long period of quiet (which is different from deliberate silence) while the various ministers, altar servers, and musicians receive communion. At some point, usually after the choir has received communion, the people in the nave are invited forward. Finally, when the organist is back at the bench and the choir are in their places, some music starts.

That’s not how it’s supposed to work.

The prayer book says we should have silence at the fraction. Then, according to the additional directions, “While the people are coming forward to receive Communion, the celebrant receives the Sacrament in both kinds. The bishops, priests, and deacons at the Holy Table then communicate, and after them the people” (BCP page 407). Got that? The celebrant receiving communion is not meant to be a big focus, but rather one part of a larger whole as the whole assembly receives communion. By the way we carry out our liturgy, the celebrant’s reception of communion is usually a focus because everything else grinds to a halt. If we do it that way, the clergy receiving communion are separated from the people receiving communion. If we do it the prayer book way, it’s all one organic whole. The movement (and the sound) begin all at once. And everyone, if you do it the prayer book way, keeps silence.

In other words, too often we put the silence in the wrong place.

Imagine it the prayer book way. The bread is broken. The world stops. There is no sound, and there is no movement. We are left with only one task: to ponder the mystery of a God who dwells among us, who is broken for us. When we manage this — say thirty seconds or a minute — it is a profoundly counter-cultural act. Our liturgy briefly stops its multitasking ways, and we are left with only silence: purposeful, holy silence.

Then when the fraction anthem is sung and the invitation is made, a great dance begins as all are fed. It’s lovely when we do it that way. In places with few musicians, it’s tricky, but there are lots of ways communion music can happen.

What usually happens is that we miss the silence that the rubrics require. Aside from the issue of violating rubrics (yes, I am a bit of a prayer book fundamentalist), we miss a great opportunity. Offering everyone a few moments to ponder, to pray, to wait, could be a gift. In our go-go culture, it would be radical. It would suggest that adding one minute to our liturgy for holy contemplation is more important than finishing in a set time.

Let me change the subject for a second, just slightly.

A few years ago, back when I was a parish priest, we decided to have a bit of silence in our Advent liturgies. In addition to the silence at the fraction, we added three minutes of silence after the sermon, before the creed. We put in a note that we’d keep silence for three minutes, and we timed it. In our preaching those weeks, we suggested some things people might pray about or think about in the silence that followed the sermon.

The first Sunday, I was a bit nervous. Would it work? After attending Quaker meetings in my younger years, three minutes of silence isn’t much, but in the context of a Sunday liturgy it’s a looooong time. Would young children be quiet? Would the moment be ruined by mobile phone ringtones? Would anyone like this? Would people complain that we lengthened the service by three minutes?

I couldn’t believe the gratitude. We had found something important. In the busy time of pre-Christmas, people had no quiet time. Ironic, isn’t it, for Advent? Families talked about the gift of those three minutes. Children — even toddlers — understood in a deep way that this time was holy, quiet time. Perhaps you couldn’t always hear a pin drop, but it was definitely holy silence.

I think we should try this more often. Instead of awkward quiet moments between things (while people are receiving communion, or perhaps while a reader is walking to the lectern), I hope we might make room for purposeful silence for no other end than silence itself.

What would it be like if we built silence into our liturgy every Sunday? How radically counter-cultural would it be for us to add a few minutes in a busy society, to make room for simple, silent prayer?

What would it be like if, after we break the body of Christ, we made time to ponder what we are about to receive, to think about who we are, to pray for Christ’s presence in our lives?

If we’re never quiet, how will we hear the still, small voice of God?