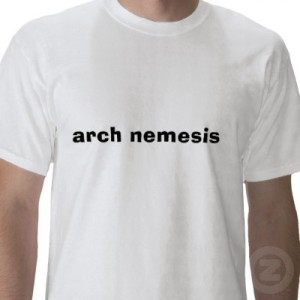 Long-time readers of 7WD will know two things about this blog. First, I don’t always write about inside-baseball churchgeekery. Second, one of my favorite unholy topics is my archnemesis, Tim Schenck. Plenty of people were confused at General Convention, because we were seen together — sometimes smiling. But it was just because we had to. Lent Madness has forced us together, so we manage to tolerate one another. Plus, I get plenty of ammo for my anti-Tim rants.

Before I get to Tim’s many flaws, I thought I’d share some other nemesis news. In recognition of his devious ways and secret identity, I am hereby naming Maple Anglican (pronounced anj-el-i-can) as an Official Nemesis. Because he’s Canadian, he’ll never be promoted to archnemesis. However, given that Canada is overrun by excrutiatingly pleasant people, I think nemesis is the equivalent of a shark amongst minnows.

After years of careful consideration, I am hereby naming an Official Overseas Archnemesis. Dave Walker, cartoonist/ne’er-do-well. His British citizenship and dominance over the Anglican Communion makes him eligible for the title of archnemesis, which he has surely earned. Besides his ostentatious palace-tent at the Lambeth Conference, Dave was implicated in a feather-ridden scandal which has never been fully investigated. So consider yourself duly notified. I can handle two archnemeses, especially because they are on different continents.

Well, back to Tim.

My longtime archnemesis has launched a silly blog, “10 Things That Annoy Me“. It fits his spiritually uplifting worldview perfectly. Whilst I cannot condone his negativity, I do think it’s important to speak truth to your archnemesis. So I have compiled a list of annoying things about Tim. Remember: it’s completely different from his cynical list. My list retains spiritual goodness, infused with truthiness. The church has long practiced the habit of engaging in harsh criticism of its rivals, and I intend to continue to the venerable practice.

P.S. Tom Ferguson is angling to be named a nemesis, but he’ll have to clear up a few things first. Which is it, a Hall or a Seminary?

P.P.S. Last year, I gave up my archnemesis for Lent. It was a grueling season, so I might just take a pass on Ash Wednesday next year.