I know it sounds shocking, but poor fiscal management is not the greatest immediate threat from GOP presidential candidates to me and my friends. It’s not even their complete absence of actual family values and its companion, blatant hypocrisy. Here’s the frightening truth: there is every chance a Republican president will demand the death penalty for drinking coffee.

You think I’m being alarmist, right? Well, read on my friends. Consider some facts: Newt Gingrich was speaking against the opening of a Starbucks franchise when he said that Starbucks is part of a “Liberal cultural-political offensive designed to undermine and destroy our civilization.” Now if you think something is a threat to civilization, wouldn’t you do anything to stop it?

Then there’s well-known serial killer Mitt Romney whose religion is famous for opposing coffee consumption as a moral evil. If you’ve killed once, killing again isn’t so hard. See where this is going? Stay with me: it gets worse.

Ron Paul finds Starbucks useful, but only as part of his culture of half-truth and outright deception. He wants everyone who orders at Starbucks to give their name as “Ron Paul.” It is increasingly difficult to write satire. (Since Ron Paul likes everyone saying their name is Ron Paul, he should watch Being John Malkovich sometime. He’d get a kick out it.)

And let’s not forget Michele Bachman, a likely vice presidential candiate, who is on record saying — on the floor of the US House of Representatives — that Starbucks is the place women stop on their way to get abortions. Sadly and outrageously, I am not making this up.

Rick Santorum has a Starbucks gold card, if media reports are to be believed. But he won’t use it when campaigning, because he thinks people will find it elitist. Ironic, isn’t it, that Santorum is in the (Starbucks) closet? Someone like that could turn his rage in surprising directions!

People like New Gingrich love to label my politics as elitist socialism and the like. As if that makes sense. So in the spirit of fairness, I’m going to turn around and call New Gingrich a moralistic fascist. And you know what moralistic fascists do? They go after people who differ from them. Take, for example, coffee drinkers. 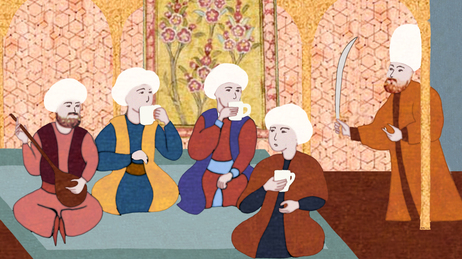 It has happened before. You can read about it in history books, though I realize many GOP folks will dismiss “books” as elitist. History is a social science, so they probably won’t trust that either. On either count “social” or “science” it is suspect. Anyway, for those of you who are still with me, here’s an example from the blog post by Adam Cole:

Sultan Murad IV, a ruler of the Ottoman Empire, would not have been a fan of Starbucks. Under his rule, the consumption of coffee was a capital offense… The sultan was so intent on eradicating coffee that he would disguise himself as a commoner and stalk the streets of Istanbul with a hundred-pound broadsword. Unfortunate coffee drinkers were decapitated as they sipped. Murad IV’s successor was more lenient. The punishment for a first offense was a light cudgeling. Caught with coffee a second time, the perpetrator was sewn into a leather bag and tossed in the river.

This has been a problem not only in Muslim nations, but in western Europe as well:

In Germany, a fearful Frederick the Great demanded that Germans switch from coffee to beer. He sent soldiers sniffing through the streets, searching for the slightest whiff of the illegal bean. In England, King Charles II issued an order to shut down all coffeehouses after he traced some clever but seditious poetry to them.

It’s one step from “Freedom Fries” to “Kill the Coffee Drinkers!” The “War on Drugs” could easily include caffeine, which is, I am told, a drug.

So there it is. When the time comes, vote for Obama if you ever hope to drink coffee again.

Sultan illustration from the NPR blog linked above.