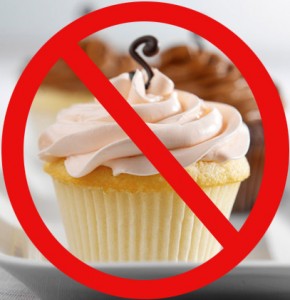 I love the church, but at times it seems intent on doing dumb things. So that’s why, every now and then, it’s good to look around and realize that some organizations are even dumber than the institutional church. Take, for example, the TSA. For my non-US readers, this is the Transportation Security Administration, the people who menace travelers with arbitrary rules, but without any of the entertainment value you might expect from security theatre.

Case in point: it seems that cupcakes have been deemed the threat the national security. Yes, that is fact, not satire. Now, it seems, the TSA is defending its decision. It’s not the only example of lunacy from the TSA.

Slate gives us other (actual) examples: 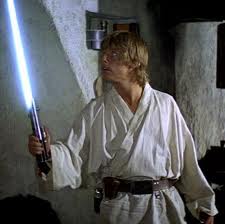 The product neither looks like a real weapon nor does it contains part that, by themselves, are TSA contraband. It is an imaginary weapon hazardous only to a race of imaginary space-people invented by George Lucas. Thus, confiscating a lightsaber is a little like confiscating a genie bottle or a magic wand.

Sometimes I wonder if our whole country is nothing but a reality TV show for the rest of the world. Speaking of which, I wish all TSA “officers” had to do some international travel once in a while. Here’s what you notice when you go to other countries: there is no one screaming at you near the security checkpoint as you approach, telling you over and over to take off your shoes, remove your laptop from its bag, etc., etc. Screaming. It’s pleasantly quiet, even peaceful, in most of the checkpoints I’ve been around throughout the world.

Shoes are apparently a threat only in the US. A couple of years ago, I was on my way back from a trip to southeast Asia. I was a bit groggy from 20+ hours of travel, and I approached a TSA checkpoint. Being one of those people who had tuned out the yelling, I was a little slow getting my shoes off. The agent screamed: “Take off your shoes!” I muttered something or other. More screaming: “Every airport in the world makes you do this!” Well, no. But one does not argue with authority-challenged drones, or one ends up being detained.

It is not clear that airport security is any more effective since the TSA was created in a fear-mongering bout of national hysteria following the September 2001 attacks. Every time a news organization does an investigative report, they seem able to smuggle whatever they want right past these high-drama checkpoints. And yet, the American public doesn’t seem to mind this pointless exercise in public art. You’ll hear the comments, “Well, the line is long, but I’d rather be safe…” as if that long line is in fact keeping anyone safer than a more expedited security check.

I write about all this because it’s another symptom of dysfunctional American politics. Any rational examination of the TSA would conclude that either one of two approaches would make much more sense. We could return to pre-2001 era security with a few minor and important improvements. That would dramatically reduce airpot angst, while cutting sales of 300ml containers of shampoo. (Maybe there’s a bigger shampoo lobby than I thought.) Or we could go to a really secure model and implement something along the lines of El Al. That would be highly effective, but would be so expensive and inconvenient that people might consider alternatives to air travel. Gasp! 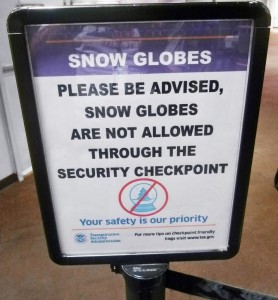 Instead, we all tolerate a system that is wholly ineffective and much more expensive than several slightly different alternatives (e.g. using private companies instead of a government agency to implement the front-line checks). We all quietly line up and dutifully remove our shoes and belts. And no one points that that the emperor has no clothes. Or maybe the emperor is wearing a ridiculous blue uniform. Also, did you know that you cannot harm the emperor with a snow globe? And yet snow globes are contraband at the airport. Honest to God, I am not making that up.

Here’s one thing I do. Perhaps you’ll join me. I do not ever go through the whole-body scanners. You are allowed to decline, and they have to give you a pat down instead. (People on travel websites sometimes call these pat downs a free “gate massage.”) Why don’t I do go through the scanners? Well, first of all, it’s an extreme and expensive form of security theatre. The props have cost millions and millions of dollars, and yet it’s quite easy to conceal things, if one wished to do so. Just Google around if you want to learn more about that.

If everyone declined the scans, they’d have to stop doing them. Declining the full body scan is low-risk passive resistance to a stupid system. Second, it’s not clear that the scanners are safe. For the most part, the US is the only country in the world that is using these things on a wide scale, and there seems to be some question about the studies which supposedly have vouched for them as safe. Third, I will not support a system in which there have been known privacy violations — with little consequence to TSA managers. It takes 2-3 minutes longer, but at least I feel that I’ve done my small part for the civic good.

Stuff like this drives me nuts. We see something that’s broken. Every rational person — who is not running for office or profiting from the industry — says it’s broken. And yet most of us, including myself, don’t do much to fix it. While broken things like this are present throughout our culture, they’re particularly galling when in government, because we’re all paying for it.

There are plenty of broken things in the church too. But at least no one is taking cupcakes. Thanks be to God for that.