In my previous post, I wrote about the disturbing phenomenon of priests wearing billboards instead of clergy shirts. A closely related problem can be found in sacristies and chancels in more places than I care to imagine. The examples shown here are actual chasubles for sale today. I have spared the vestment company by not linking to them here. (I worry that the posting of these seems dangerously close to putting me in the company of curmudgeonly priests and bloggers.) 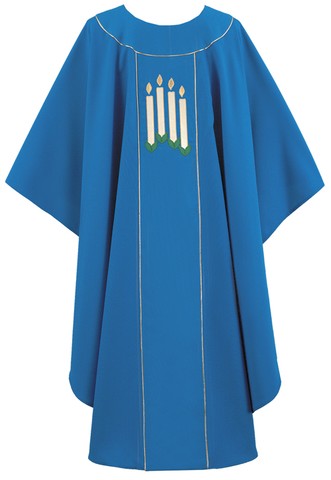 This Advent chasuble has four candles on the front. Do you see the problem? Are you, like me, imagining four candles somewhere with little pictures of chasubles on them? Where does it end?

It’s enough to provoke a nightmare, which I’m hesitant to post lest some marketing genius from Almy catch wind of it. Imagine a candle-chasuble with LED lights. Each Sunday, as the celebrant enters, a new light pops on. Then, perhaps just before the Collect of the Day, she or he could push a button on the chasuble and a little recording of “O come, O come, Emmanuel” could play, kind of like a greeting card. Hey, we’re headed that direction. You read it here first. 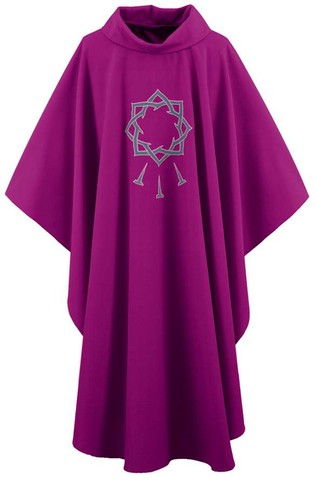 In case you forgot what happened on Good Friday, here’s a “Lent chasuble”. Among many other eye-gouging problems here, we don’t actually spend forty days of Lent contemplating the horrors of Good Friday. We have, um, Good Friday for that. And if you want a Good Friday chasuble of this ilk, God help you, you would want it to be red. But then you’d run the risk of wearing the thorn-and-nails chasuble instead of the fire-and-dove chasuble on Pentecost.

So why put those particular images on the front at all? Well, because it’s hard to capture Lent with a pithy graphic. How do you picture self-examination and repentance? Maybe something plain and simple. A simple thing. Oh, right. That would have been a plain purple chasuble.

One more. This one seems funny to me, because if you stand back far enough, I think the image looks a bit like a smiley face. Perfect. Every celebrant wants to know how to reach those grumpy people who always sit and scowl in the back of the church. So why not wear something that looks OK up close, but vaguely comical/ridiculous at a distance? Those frowns will turn upside-down when they catch a glimpse of this number!

One could have easily found dozens more examples of horrifying chasubles. But it’s like going fishing with dynamite. It’s criminally easy. These examples — and many more — reflect both bad taste and poor theology.

And in all this, the worship of almighty God has taken a back seat. Sometimes, a chasuble should just be a chasuble.

Strike that. Always, a chasuble should just be a chasuble.