Real priests do not wear billboards. Part I

When I was thinking about ordained ministry, the idea of wearing a clergy shirt was appealing to me. The attraction was not any perceived power, or the desire to have a piece of plastic around my neck. Rather, it was the knowledge that every morning, I would have no decision to make about attire. Reach into the closet, grab the next black shirt, and put it on. I suppose that bias is one reason why I was particularly disturbed by two recent Facebook postings. 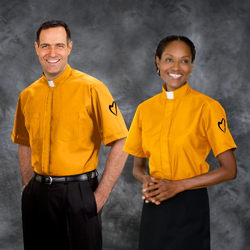 It seems to me that the point of the clergy shirt, besides my selfish desire to avoid sartorial dithering, is that it’s a role-based uniform. People see someone dressed like a priest, and they may be more easily able to relate to the wearer as a priest, not just as another dude or dudette. Mind you, I’m not saying the shirt is necessary, but that it has a functional benefit.

This is not unlike the wearing of a nurse’s uniform. The uniform does not define the person, but when you go to a hospital, you know who the nurses are and you know that you can just start in asking them questions and so forth. I do not want to see a nurse wearing a uniform adopting a position on national health care reform. It is a distraction at best. Someone seeking a priest very likely does not want to have a conversation about whether or not they are also on the side of love, or what that means. This billboard function wrecks the purpose of the shirt. If you want to campaign, put a sticker on your car or wear a button. 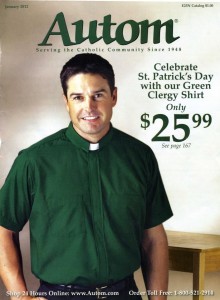 Now you might think — perhaps rightly so — that I’m making too much of this. But this one pushed me over the edge. It is a clergy shirt marketed to people so they can celebrate St. Patrick’s Day. Really? So, what, I’m going to put on this shirt and partay? Unless I’m a Protestant in Northern Ireland, and then I guess the orange shirt pictured above might be more useful.

If someone has need of a priest while I’m wearing this ridiculous shirt, they are likely to wonder if I’m a real priest or if it’s some kind of joke. Wearing this stuff might relieve monotony for the person who, unlike me, tires of the same color every day. Alas, it places a burden on everyone with whom the priest interacts. They have to figure out what message is being sent and what it might mean for them in this moment.

Now I’m aware of folks who like to wear all manner of colored shirts. Many bishops choose to wear purple. There is good ancient justification for this, though plenty of bishops choose to continue wearing black. Some clergy wear pastel or “French blue” shirts or other colors. It doesn’t float my personal boat, but I think these other colors generally serve the functional purpose of the clergy shirt.

You can make your own decisions about plaid shirts, Hawaiian shirts, and the like. Again, not my style, but I know some clergy who go in for that, and it seems to work for them. I do wonder if there have ever been problems. I’d say if pastoral conversations begin very often with “tell me about your Hawaiian clergy shirt” then it’s crossed the line from “fun” to “distracting.”

In these strange shirts, there is a shift from symbol or function to fashion statement or, worse, billboard. What is meant to serve a function becomes a caricature, a distraction. These shirts are another worrying symptom of a problem we face in the church. To those who would wear the saffron shirt, I have a message: it’s not all about you.

A friend of mine was in social work school many years ago. As her personal fashion brand, she always used to wear two different mismatched socks. Well, they were mismatched from each other, but they always matched her outfit perfectly. After several visits with clients in their homes which began with “tell me about your socks” she stopped doing that. She saw that it was getting in the way of her reason for being where she was.

So next time you’re contemplating that “special Easter” shirt with bright egg shape designs, fuzzy pink cuffs, and a matching bunny ear hat, think again. It’s going to undermine your work if you have to make a hospital visit or attend the death of a parishioner.

Remember, it’s about Jesus. It’s about those we serve. It’s not all about you.

Also remember the ancient and venerable saying, “Black is always in style.”

Coming soon: another post in this sad series on wearing billboards. Chasubles!