A dashboard for your congregation?

No, I’m not talking about dashboard Jesus. In fact, we’re talking about virtual dashboards. It seems that the Methodists have been experimenting with the idea of “dashboards” to provide up-to-date indicators on congregational health. It started in Alabama, but it’s spreading to other places. 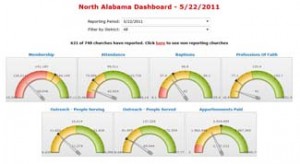 By 2009, North Alabama had implemented an online Conference Dashboard. Every Monday, churches log in their numbers for attendance, baptisms, giving and other measures. Pastors—and anyone else—can see how their numbers stack up against other churches. Now, Bishop Willimon logs in every Tuesday to see which churches reported the greatest increases—and which had the biggest drops. Dials and charts on the dashboard give a quick glimpse of how the numbers are trending.

There have been protests, as you might expect. People object to any attempt to quantify the value of church. They worry that the wrong things will be measured. But I think these dashboards might be a good idea, though there are some pitfalls and limitations.

The Episcopal Church is facing a crisis. Our crisis is not about ACNA or Gene Robinson or the inevitable guitar vs. organ fights. Our crisis is that, nationally, our Sunday attendance has been declining at about 3% per year for the last few years. Do the math of what that starts to look like in 10 years. We’re just getting close to the precipice, by the way. At some point, things could really start to plummet.

So how do we reverse that? First, we need to understand why we are shrinking. We need to find places that are reversing the trend. We need to see what works and what doesn’t work. Without data, we are left with anecdotal impressions and lucky guesses. With data, we can make informed decisions — as individuals, as congregations, as dioceses, and as the Episcopal Church.

At the moment, you can go have a look at a certain web page and get some key indicators for each congregation and diocese in the Episcopal Church. You can see financial giving, membership, and average Sunday attendance. This is good, but the data are a couple of years old. And what’s there is limited. What if we could also see how many active ministries there are? How about participation in Christian formation programs? Number of people directly served through outreach ministries? The list could go on.

There would be a modest burden in collecting the data, but once collected, a diocesan leader would be able to spot troubled congregations. They’ll stick out like a sore thumb with their numbers. Within a congregation, lay leaders would be able to check progress against goals or to compare their congregation with another. Clergy would know more about where to focus their efforts. By using good technology, the data could be harvested and displayed quickly.

Outside the church, no one would rely on two-year-old data in making strategic plans. Why should we be making decisions in our congregations with old data or — worse yet — no data at all? Now some people will object that we’re ignoring some gospel mandate or that you can’t measure spiritual growth or that these dashboards will kill puppies. Nonsense. How would we know if we’re going into all the world and making disciples if we don’t look at a map? Have a look at the New Testament, and you’ll see that Jesus and his followers counted disciples, loaves, fishes, sins, listeners, and all sorts of things.

If we were to focus only on a few metrics, that would indeed be a problem. But this objection is a red herring. There is not much of a danger of congregations becoming data-driven soulless machines. There is a great danger, however, if we do not start making some smarter decisions so that we can grow more healthy congregations. Surely we need to pray and to listen for God’s guidance. But God gave us brains for a reason.

What say you? Are there dangers in using dashboards? Benefits? What should we measure?