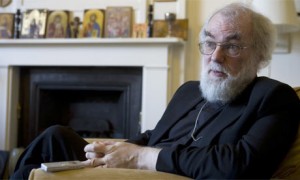 The secret progressive klatsch and the secret conservative cabal within the Anglican Communion met recently with the Archbishop of Canterbury. As you know, we conspirators are all bloggers. As a blogging member of the liberal conspiracy, I was planning to join with others in releasing a statement in a major press event in Pasadena. However, the MCJ has decided to scoop us all. They must have had a secret recorder at the meeting, and they’ve released a transcript.

ROWAN WILLIAMS: First of all, the Archbishop of York and I would like to thank you all for coming. As many of you know, some are calling this meeting the world’s first digital Lambeth Conference because…

SCOTT GUNN: Does that mean that we’re all just going to sit around babbling for a few days and then issue some kind of meaningless statement? Because if we are, count me out. I’ve got Spurs tickets for this afternoon.

WANNABE ANGLICAN: Who are they playing?

ROWAN WILLIAMS: No, no, it’s nothing like that. I called this meeting because the Anglican Communion recognizes the influence and importance of the new media in Anglican affairs…

Make sure you read the whole thing. At point, I imagine the conservatives are huddled in their secret volcano lair. We progressives will be meeting soon for a meditation retreat at a Christian/Zen center to develop a response.