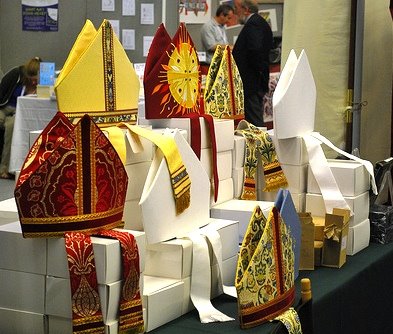 I have (mostly) resisted writing about recent goings-on in the Church of England. It seems better for my spiritual health to write about mission of the church or to fill this blog with silly sundries. Still, recent events have pushed me to say a few words. Here we’ll quickly cover three different, yet strangely related events: “mitregate”, “The Betrayal of John (redux)”, and “Ewww! It’s a ‘Bishopess’!”

In case you were living under a rock, sanity departed the Church of England in last month’s incident in which the Presiding Bishop of the Episcopal Church was told she could not wear her mitre whilst celebrating the Eucharist in Southwark Cathedral. Yes, the primate of the Episcopal Church, who was vested as a bishop at the Lambeth Conference in 2008 (among other places), was ordered not to wear her pointy hat, lest this bring about the ruination of Christendom. At first it seemed that this was Lambeth bureaucracy being too efficient for its own good. Then it emerged that plenty of women bishops have been wearing mitres all over England. It’s just Katharine who can’t wear hers. How would one satirize such a thing?

The Betrayal of John (redux)

Then there’s the recent kerfuffle in which it was rumored that Jeffery John would be named as the Bishop of Southwark. John, who was to be named as Bishop of Reading until the Archbishop of Canterbury betrayed him in 2003, has behaved nobly through this whole sorry mess, managing to refrain from saying anything to the newspapers.

Well, no surprise about whether this inspiring preacher, respected administor, and gay man will become a bishop. Today’s newspapers report than John’s nomination has been scuttled by (guess who!) an angry Archbishop of Canterbury, who didn’t like the way things had unfolded. Given the nature of the story, and its very existence from press leaks, there’s plenty we’ll never know. But plenty is clear.

Just one more little rabbit hole to go down. It turns out, if you didn’t know, that the Church of England only allows male bishops. Women can be priests, but there are cootie barriers baked into the system to protect men who don’t like such things. Parishes can sign little papers so that they don’t even have to talk to a bishop who has possibly been tainted with girl cooties. There are special (I am not making this up) “flying bishops” who pop in to dispense cootie-free sacraments. In special cases, there are even separate communion lines for consecrated communion bread with and without cooties.

As they are finally getting around to making provision women bishops, it seems that some people want to have back-of-the-bus bishops and front-of-the-bus bishops. General Synod keeps saying no to these schemes, and some bishops keep finding ways to institutionalize apartheid in the ordinal. Most recently, the Archbishops of Canterbury and York have produced a plan that is cruel in its cynicism, claiming to uphold a single bus ticket, while arranging for there to be a boys-only section in the front (oh, gee, I guess you’ll have to go to the back, but you’re equal!).

The triumph of fear

What is shocking in all of this, aside from the rank sexism and clubby patriarchy of it all, is that the leaders are allowing fear to rule over mission. When you start parsing the arguments for and against, some themes emerge. Those who oppose women or gay bishops usually cite scriptural warrant, traditional practice, ecumenical relations, and institutional damage. Those who favor women or gay bishops usually cite scriptural warrant, gradual change through church history, justice, and institutional mission/vitality. I won’t rehearse all the arguments here, and most readers will know where they stand already.

However, the most shrill argument that pops up again and again is that allowing the House of Bishops to be tainted by cooties will cause massive exodus of clergy to that bastion of moral rectitude, the Roman Catholic church. Here’s what I say in response. First, let’s call your bluff. Not many will go, especially when they realize that Rome’s hierarchy will have far less patience with their petulance. Second, since when did it become a good idea to allow people to take the church (or any organization) hostage by their threats to take their toys and leave?

Why does this argument carry such weight in England? Let’s suppose everyone from Forward in Faith and everyone who is under the care of the flying bishops (guffaw) departed tomorrow? What would that be like? Presumably those folks would be happier — and more able to worship as they feel called. And everyone else could get on with things. In other words, the church would thrive.

I’m too weary of all this to take up every aspect of the arguments, though I will gladly opine at the request of my beloved readers. Let’s just say I think the leadership of Synod should do what they’re going to do and get on with it. And perhaps General Synod might invoke the Holy Spirit in its deliberations.

Is there room for the Holy Spirit?

In the Episcopal Church, progressives love to talk about the Holy Spirit. “Oh, that vote was amazing. The Holy Spirit was truly present.” That means the left won the vote. For progressives the Holy Spirit never urges a conservative vote. In that sense — ratifying what we already think — we could all stop, um, blaspheming the Holy Spirit by dragging her into every mundane bit of parliamentary minutia.

There are plenty of problems with the American process of selecting bishops and of running our church. However, there is also plenty to celebrate. The openness of our legislative process and our episcopal elections is (mostly) a good thing. At their worst, episcopal elections can degenerate into political competitions. At their best, an electing convention can open itself to the Holy Spirit and find itself basking in a grace-filled moment.

There’s no reason why the process of choosing English bishops and of its synodical governance should not be Spirit-infused. Indeed, they probably already are. But I was struck by this description of the bishop selection process by Bishop Pete Broadbent in a blog comment:

A lot of this is based on ignorance of the way the Crown Nominations Commission works. Those meeting will have a number of names before them (when last I did it, we had six going into the final decision process). They talk and pray and gradually whittle it down to the final choice or choices. It suits the drama merchants of the media to make this a matter of one person being accepted or rejected. The prosaic truth is that there will have been several plausible candidates discussed…

It sounds like a political calculation, in which players in the smokey back room advance the man (ahem!) who will toe the party line. In all the comments I’ve read, on blogs to the right and to the left, the tenor has been similar to this: it’s an institutional process — a force not to be trifled with. One wonders if there is any room for the Holy Spirit? Is prayer a part of these meetings? Is it only about a career arc, or is there room for a bishop who might be a brave visionary?

If this were only a comment or two, I’d chalk it up to American misunderstanding of English culture. Indeed that may be exactly what’s going on here. But every comment I’ve read, and I’ve read a few hundred of them, has been written in like manner. In this instance, I very much hope I’m wrong. I hope that choosing apostolic leaders in the church is deeply enriched by prayer and infused with grace.

Maybe it’s time to start speaking differently. Maybe it’s time to make sure that, whatever we decide, our church is a sign of grace in a fear-filled world. This is my hope for the Church of England, for the Episcopal Church in the USA, and for every church. May we always seek to be no more and no less than followers of Jesus Christ.

If we could pull that off, I have a hunch that our nets will be so full that we won’t have time for idle scandals about hats.