Is the iPad bad for democracy? 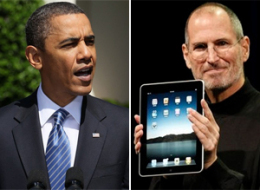 Last weekend, President Obama trash-talked the iPad and other tech toys in his commencement address at Hampton University. Here’s what he said:

You’re coming of age in a 24/7 media environment that bombards us with all kinds of content and exposes us to all kinds of arguments, some of which don’t always rank that high on the truth meter. And with iPods and iPads, and Xboxes and PlayStations — none of which I know how to work — information becomes a distraction, a diversion, a form of entertainment, rather than a tool of empowerment, rather than the means of emancipation. So all of this is not only putting pressure on you; it’s putting new pressure on our country and on our democracy.

OK, so I get his point. We distract ourselves too easily and too often fail to be well informed citizens. It’s odd, I think, to admit that he doesn’t know how to use these devices and then to criticize them. Had his speech-writer done some digging, they might have learned that the iPad is actually a decent way to get access to substantive information. Also, the other three devices he mentions are primarily music or gaming devices, on which one is less likely to try to become informed.

There is also some irony here. This is the president who is on Facebook, Twitter, and Flickr. If he is so opposed to distraction, maybe he should lay off the social media? Oh, wait, that’s what helped to get him elected. So what’s his strategy with this criticism? Is he on to something?

I suspect this is a throw-away line, meant to remind college graduates to take seriously their responsibility as citizens, not merely to be people who go through life having a good time. The iPad line might have been some speech-writer’s attempt to sound relevant and hip, while also being a bit poetic with the distraction bits. And, of course, every politician loves to climb on the anti-Hollywood-down-with-big-media bandwagon, even as they cozy up to the same forces to gain cultural currency. (This is just like the trope of railing against corporate America while cashing their large checks.)

No doubt, there is much truth to the president’s remark about distraction and information. We kid ourselves if we think we can be informed about anything by watching a television news program or reading a quick headline on a website. To understand issues, you have to dig deeper, down to the book-length level. But while McLuhan was right to note the medium’s relationship with the message, there are always exceptions. USA Today is not the New York Times. The Drudge Report is not BBC News online. And an XBox is not an iPad.

Today I read most of one book on my iPad, and I purchased and began reading Diarmaid MacCulloch’s recent history of Christianity. I regularly read the NY Times online. Among the 200+ blogs I follow every day, there is a great range from serious thinking and reporting to pure entertainment and silliness.

I’m as quick as the next guy to make sweeping generalizations and to be sloppy with language in the service of making a point (or a joke). The landscape of this blog is littered with lots of detritus and only the occasional serious or probing thought. However, we should not assume that every blog is junk. Not every Facebook friendship is devoid of meaningful connection. Not every Twitter user is engaged in relentlessly self-obsessed micro-narrative (though most are doing just that). And not every speech of POTUS is accurate.

Let’s surely encourage everyone to be good citizens, well informed and active. Let’s criticize our culture’s fascination with celebrity and entertainment. Let’s mourn the decrease in civility and substantive dialogue in our society. But let us not cling solely to the old methods of being our best selves. If we avoid iPads, should we avoid the web? What about televsion? Newspapers? Movable type? You see, while the medium is often the message, it’s also true that you can find substantive messages on many media, and trashy messages on some of the same media. Older media are not inherently better, though newer media are surely more likely to be filled with more glitz, zazz, and buzz.

I hope Steve Jobs sends a new iPad to President Obama and that his kids show him how to use it. He’ll probably find some great ways to amuse himself with movies, music, and games. And he might encounter great books and read excellent journalism. He might also find that it’s a great way to engage with the citizens of this great nation who follow him on Twitter and Facebook.