The Pope can dish it out, but he can’t take it? 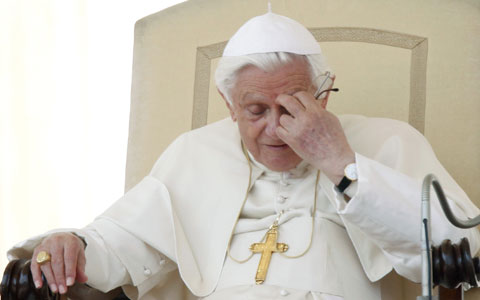 Any Pope serves as one of the world’s leading moral teachers. It goes with the job. While many of us won’t agree with papal teachings on this or that, we can usually respect the person who holds the office. Of course, there’s a flip side. The person who holds the office has to be a serious grown-up. Harry Truman said (more or less), “If you can’t stand the heat, then get out of the kitchen.” As I sometimes say to leaders, “If you don’t want anyone to go after you, then don’t sit in the big chair.” The Pope has a very big chair. It doesn’t seem like some of his minions are ready for the responsibility that comes with being a papal minion (or whatever the correct Latin/Italian term is).

It should not have been surprising then when a low-level paper-pusher in the British government had some fun at the Pope’s expense. In preparation for a papal visit, all manner of triplicate forms and lengthy documents are being produced by government officials high and low in Britain, I am sure. One of those documents was written in jest, saying that Britain “should mark the visit by asking the Pope to open an abortion clinic, bless a gay marriage and launch a range of Benedict-branded condoms.”

Any sane person who reads about this will instantly understand that the paper was not intended to be taken at face value. A good many people will be amused by this litany of suggestions, while others will be offended. You’d expect the Vatican to laugh it off or at least ignore it. At most, I’d have thought some mid-level bureaucrat in Rome would call his counterpart in London and demand some discipline for the offending staffer.

This papal regime has once again managed to handle something in incredibly bad form. It was reported that Vatican officials were threatening to cancel the Pope’s visit to Britain over this “incident.” Did I mention something? The author of the (ill conceived, to be sure) paper is twenty-three years old. Who knew that your average Joe, right out of college, had the power to sway the papacy and remake global diplomacy?

I am quite sure Pope Benedict wouldn’t care about this paper, if he had even heard of it. This has the marks of mid-level bureaucrats again. On one side, some staffers produce an unfortunate paper. And on the other side, their counterparts showed they have no sense of humor and, even worse, no tact. Haven’t they heard the saying, “Sticks and stones may break my bones, but names will never hurt me”? Oh, wait, any mention of breaking bones might be a little close to home for the people who brought us the Inquisition.

Seriously, the Pope needs to get his act together soon, or he risks becoming completely irrelevant to the world and to his own church. No one likes a bully, but that’s exactly what’s going on when a state visit is threatened over a joke gone bad. Even though the visit is back on again, the whole thing now has “ridonculous” written all over it.

If Benedict’s advisers are handling such a basic incident so badly, it’s no wonder the sex abuse scandal isn’t being handled better. That one, above all others, requires deftness and sincerity that seems be lacking in Vatican pronouncements as of late.

I am not a papophile, but anyone can plainly see that the Pope is the most visible Christian on the planet. For the sake of the universal church, I’d like Benedict to get some better bureaucrats. John Paul II was much better at all this. What the papacy requires is a person of high moral integrity who acts with sincerity, justice, and compassion. What the church does not need is a humorless, narrow, and moralistic bureaucracy.

So Benedict and friends, lighten up! Oh, and get your act together and fess up to whatever part you might have played in the sex abuse scandal. Then perhaps people wouldn’t be threatening to arrest the Pope (which would be a much better reason to cancel a papal visit, by the way).

If the Vatican’s diplomats had some zazz, they would draft a papal bull threatening to excommunicate all English twenty-three-year-olds until the infamous paper’s author wears a dunce cap. Now THAT would get some people’s attention and maybe a laugh or two.

It’s funny. Maybe after a chuckle or two, coupled with some serious truth-telling, people would start listening to the pope again. It comes back to the beginning. If you want to dish it out, you have to be willing to take it.