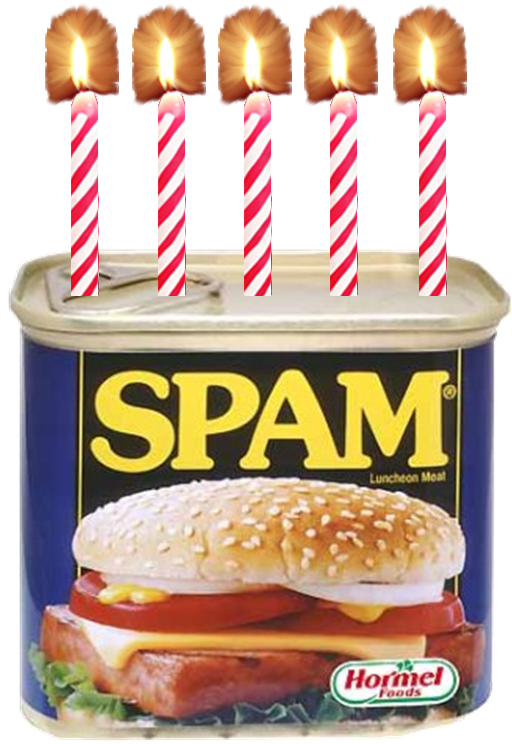 Today is Sweet 16 for spam. No, not the “meat” product. I’m talking about unsolicited commercial internet messages. Notice I did not use today’s standard term, unsolicited commercial email (UCE). That’s because the very first spam message was delivered on Usenet. Usenet? Most internet users of today won’t even know what that is. Usenet is a system, in use since 1979 (!), which allows one to distribute and reply to other messages. Unlike email, which is mostly private, Usenet is more often a public system, a bit like groups on Yahoo or Google.

Anyway, you have Laurence Canter and Martha Siegel to thank for inventing the scourge of the internet. Supporting the stereotype that lawyers are minions of Satan, you’ll be interested to know that Canter and Siegel were hawking their legal services in immigration matters. Appropriately enough, that first spam message included SENTENCES IN ALL CAPS. For his part in this, Canter was disbarred. He also made over $100,000.

Spam is less annoying than it used to be, mostly because spam filters have gotten really good. But spam will go away only when spammers stop making money. Yes, there are people who think they’ll get rich by helping to transfer money from Nigeria to the US. Yes, there are people who think they can modify their bodies by taking pills purchased online. Just hit delete. If it sounds too good to be true, it is.

By the way, if you are involved in communication work, you need to make sure people want the email you’re sending out. That includes church email newsletters. Spam is spam, even when it’s for a good cause.