Coffee as a health beverage 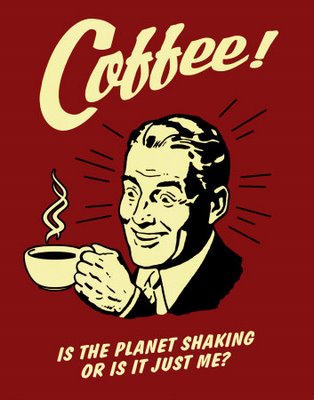 Coffee is my vice, so I’m always glad to read about how it’s good for me. As Wired reports:

Even though several studies have found a cup-a-day habit imparts health benefits such as decreased risk of obesity, Alzheimer’s and colon cancer, many coffee lovers drink decaf or forgo the beverage altogether because it irritates the stomach or spurs heartburn.

Great! It’s good for me. I don’t have irritation problems, and perhaps now I know the reason. My preference for dark roasts has been affirmed.

Roasting coffee beans doesn’t just impart bold, rich flavor. It also creates a compound that helps dial down production of stomach acid, according to research presented on March 21 at the spring meeting of the American Chemical Society. The discovery may explain why dark-roasted brews are gentler on the stomach than their lighter peers, and could lead to a new generation of tummy-friendly coffees.

Women appear to benefit from drinking three cups or more each day, according to Psychology Today.

MRI brain scans revealed that women who drank three cups of coffee per day (or 6 cups of tea) had lost less brain tissue called white matter than those who drank less. White matter, like buried phone lines, is a tangled mass of fiber-like connections deep in the brain that connect neurons in the surface layers into functional circuits. This tissue appears white because of the electrical insulation coating these fibers (myelin), which is essential for transmitting impulses. After the age of 50 our brain begins to lose white matter brain tissue, but coffee, according to this study, can check the loss. Only women drinking the equivalent of 3 or more cups of coffee per day were protected. There was no benefit from drinking less than two cups/day, and curiously, coffee had no protective effect for old men.

Alas, that won’t help me. Hmm. Maybe I should increase my caffeine consumption just in case. After all, it’s a health beverage!