Mary in a bag? 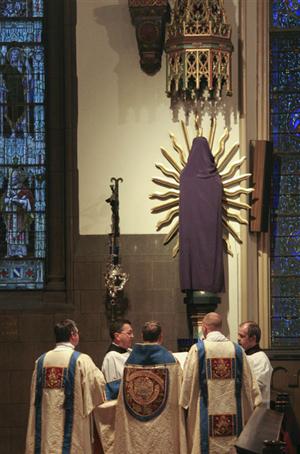 I really enjoy Canon Reid’s blog from St. Clement’s, Philadelphia. For me, it’s a perfect blend of learning, faith, devotion, and humor. In a recent installment, he explains the strange confluence of fixed and movable feasts. This week we celebrate the Feast of the Annunciation in Passion Week (itself something that only a few Anglican parishes observe). In Passion Week, all the crosses and images of a church are veiled. So at the Mass on the Annunciation, the ministers process to a veiled statue of Mary. This, says, Canon Reid, conveys a profound message:

The Passion of God’s Son did not begin in Holy Week; it began with the Incarnation. At the message of the Angel, God the Son was conceived in Mary’s womb, and it was not long till Herod was about his bloody business, and the Holy Family were refugees. Jesus offered himself totally to his Father all his human life, not just on the Cross; that was the culmination of his self-offering. And Mary shared in the Passion; as Simeon had said, when she presented her son in the Temple; “A sword shall pierce thine own soul also”. And it did as she watched her son die on Calvary. She had com-passion, sym-pathy, and so shared in the redemptive act of her son, as she does to this day.

Amen. This calls to mind John Donne’s superb poem, “Upon the Annunciation and Passion Falling Upon One Day” (1608). Here ’tis, thanks to Luminarium.

TAMELY, frail body, abstain to-day ; to-day
My soul eats twice, Christ hither and away.
She sees Him man, so like God made in this,
That of them both a circle emblem is,
Whose first and last concur ; this doubtful day
Of feast or fast, Christ came, and went away ;
She sees Him nothing, twice at once, who’s all ;
She sees a cedar plant itself, and fall ;
Her Maker put to making, and the head
Of life at once not yet alive, yet dead ;
She sees at once the Virgin Mother stay
Reclused at home, public at Golgotha ;
Sad and rejoiced she’s seen at once, and seen
At almost fifty, and at scarce fifteen ;
At once a son is promised her, and gone ;
Gabriell gives Christ to her, He her to John ;
Not fully a mother, she’s in orbity ;
At once receiver and the legacy.
All this, and all between, this day hath shown,
Th’ abridgement of Christ’s story, which makes one—
As in plain maps, the furthest west is east—
Of th’ angels Ave, and Consummatum est.
How well the Church, God’s Court of Faculties,
Deals, in sometimes, and seldom joining these.
As by the self-fix’d Pole we never do
Direct our course, but the next star thereto,
Which shows where th’other is, and which we say
—Because it strays not far—doth never stray,
So God by His Church, nearest to him, we know,
And stand firm, if we by her motion go.
His Spirit, as His fiery pillar, doth
Lead, and His Church, as cloud ; to one end both.
This Church by letting those days join, hath shown
Death and conception in mankind is one ;
Or ’twas in Him the same humility,
That He would be a man, and leave to be ;
Or as creation He hath made, as God,
With the last judgment but one period,
His imitating spouse would join in one
Manhood’s extremes ; He shall come, He is gone ;
Or as though one blood drop, which thence did fall,
Accepted, would have served, He yet shed all,
So though the least of His pains, deeds, or words,
Would busy a life, she all this day affords.
This treasure then, in gross, my soul, uplay,
And in my life retail it every day.