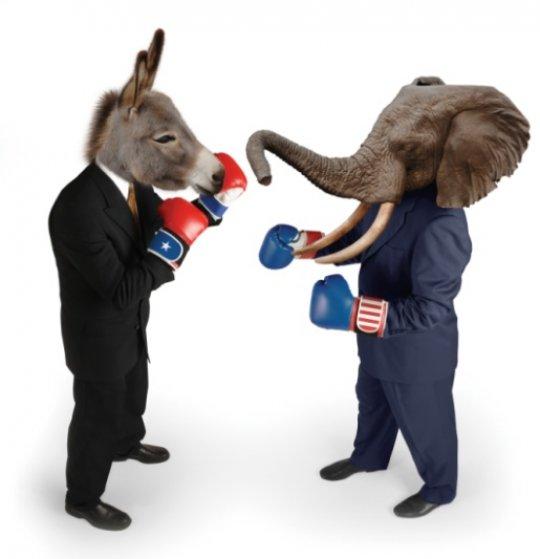 The level of discourse, if you can call it that, in our nation is increasingly shrill. I tend to think the right has been slightly less open in its approach to thorny issues, but the left shares plenty of “credit” for poisoned politics. What I wouldn’t give to be able to vote for a really, truly independent candidate who valued with common weal over the corporate-stuffed wallet.

But, as usual, I digress. There’s not much hope of improving things when people are not willing to face reality. That is, two people can have a reasonable conversation about conflict if they are both willing to agree on at least a few shared assumptions and on a common goal. Alas, it doesn’t seem that most Republicans are willing to engage reality, according to a recent Harris poll about Republican views of President Obama: “Two-thirds think he’s a socialist, 57 percent a Muslim—and 24 percent say ‘he may be the Antichrist.'”

Get that? One in four Republicans thinks Obama could well be the antichrist. It’s hard to be politically conciliatory when you think your opponent is the Agent of Satan. It’s also worth noting that there’s a disturbing increase in right-leaning wing-nuts calling for Obama to be assassinated.

Even the Senate and House, where you’d hope people might be a bit more enlightened — and perhaps even honest, things look bleak. The right has howled about our new health care bill. Socialism! Fascism! Left-wing conspiracy! Well, it turns out, if you take a deep breath and switch on the brain, that things aren’t quite the way the Fox blah-blahs and the Washington right would like you to believe. That “radical” Obama plan? It’s actually not as liberal as Romney-care in Massachusetts, though it was largely developed by the same economist. The new “socialist” plan is actually more conservative than the Republican plan floated in 1993, and even Nixon had a plan for almost universal health insurance coverage. Republicans are screaming about ideas less progressive than ideas their own party has advocated.

Let’s get this straight. Ideas similar to what Republicans have previously advocated are now seen as demonic by Republicans. What changed? The ideas under consideration this week came from Democrats, when Democrats had a legislative majority. What ever happened to the possibility of someone saying, “That’s a good idea, and I am pleased to join you in supporting it?”

I don’t know what the way out of this is. The Democrats seem incapable of governing effectively, though they have the Executive branch and solid majorities of both Houses. Instead of defining themselves as Not-Republicans, they need to start offering a compelling narrative for making our nation great again. One way to get out of the he-said-she-said game is to stop playing. We need more politicians who speak more about “us” than “them”. But how to get there?

O God, you made us in your own image and redeemed us
through Jesus your Son: Look with compassion on the whole
human family; take away the arrogance and hatred which
infect our hearts; break down the walls that separate us;
unite us in bonds of love; and work through our struggle and
confusion to accomplish your purposes on earth; that, in
your good time, all nations and races may serve you in
harmony around your heavenly throne; through Jesus Christ
our Lord. Amen.

O God, the Father of all, whose Son commanded us to love
our enemies: Lead them and us from prejudice to truth:
deliver them and us from hatred, cruelty, and revenge; and in
your good time enable us all to stand reconciled before you,
through Jesus Christ our Lord. Amen.

Almighty God, who hast given us this good land for our
heritage: We humbly beseech thee that we may always prove
ourselves a people mindful of thy favor and glad to do thy will.
Bless our land with honorable industry, sound learning, and
pure manners. Save us from violence, discord, and confusion;
from pride and arrogance, and from every evil way. Defend
our liberties, and fashion into one united people the multitudes
brought hither out of many kindreds and tongues. Endue
with the spirit of wisdom those to whom in thy Name we entrust
the authority of government, that there may be justice and
peace at home, and that, through obedience to thy law, we
may show forth thy praise among the nations of the earth.
In the time of prosperity, fill our hearts with thankfulness,
and in the day of trouble, suffer not our trust in thee to fail;
all which we ask through Jesus Christ our Lord. Amen.