I love coffee, but only the old fashioned way: freshly ground beans, strongly brewed, and nothing added. Apparently I haven’t been keeping up with coffee trends.

The Daily Mail introduces us to the “car-puccino”: A car that runs on coffee is unveiled today – but it certainly won’t take the grind out of commuting. And at between 25 and 50 times the cost of running a car on petrol, the invention won’t please any motor industry bean-counters either. Nicknamed the Car-puccino, it has been created using a converted 1988 Volkswagen Scirocco bought for £400 and chosen for its resemblance to the time-travelling DeLorean in the movie Back To The Future.

As much as I love coffee, I think I’ll steer clear (ahem!) of that one for now. I also do not intend to take part in the latest way to consume coffee. Inhale! The NY Post offers a breathless report: 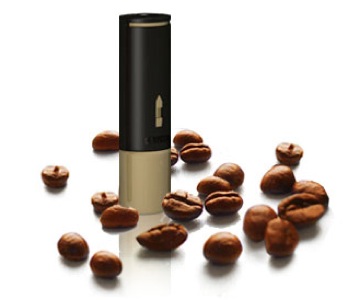 This coffee really sucks. A nutty Harvard professor has put a jolt in the java trade with a strange new inhalable espresso — allowing caffeine fiends to breathe in their morning cup of joe. “That’s what I do with all of my food anyway,” said Esther Green, a tourist from Toronto who sampled Le Whif yesterday at Dylan’s Candy Bar on the Upper East Side.

The coffee hits consist of powder inside lipstick-like containers that are pulled open, inserted in the mouth and inhaled. The sticks are sold individually for $3 or in boxes of three for $8 — and each stick delivers 100 milligrams of caffeine, the equivalent of a cup of espresso.

No thanks. This would be for the hard-core caffeine addicts out there, I guess. For now, I’ll continue to tell myself that it’s about the flavor of the coffee and the experience of drinking it. Speaking of old-fashioned coffee drinking, I wonder if Dave Walker isn’t on to something with a recent cartoon. Might be just the thing to reverse the decline in church attendance.

I really like the third idea, because it would necessitate the installation of an espresso bar in the pulpit.

Wave of the mug to Boing Boing for the coffee inhaler and to Gizmodo for the car-puccino.