In Uganda, you can view illegal material…in church 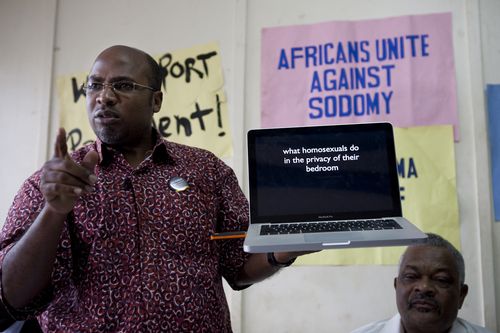 Get that? Merely speaking of homosexuality is worthy of jail time, unless you are standing in a pulpit. Does anyone see the irony here? The church founded by Jesus with the commandment to “love one another as I have loved you” is the only place where something illegal can be done — when it’s in support of hatred.

This is the kind of bile that many American Anglicans want to cozy up to. It’s outrageous. The usurpation of Christ’s church for the promotion of hatred is the worst kind of blasphemy. And these people claim to be orthodox. I hope the Anglican Communion, at some point, will stand up and speak for love and against hatred.