Parsing Synod — what have they done? 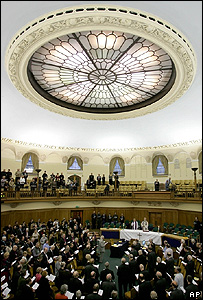 Many pixels have been darkened on General Synod and ACNA. (I updated “ink has been spilled”. Clever, eh?) Blogospheria Anglicana has been full of widely varying reaction to today’s passage of an amended resolution on the Church of England’s relationship with ACNA.

BabyBlue Online is practically giddy. You’d think Archbishop Rowan Williams was handing the keys of Lambeth Palace over to Archbishop Bob Duncan. Mark Harris says the General Synod “stepped in dung.” Over at StandFirm, they can’t seem to make up their hive mind; some say this is a victory for secessionists, whilst others say Synod has failed miserably. As with most things written by Anglicans, the import of what has been voted by General Synod is not easy to discern.

From my perspective, the motion as passed is a mixed bag. It does not achieve that ACNA sought, which was full recognition and the statement of an intention to seek full communion. On the other hand, it gives ACNA a level of recognition they did not yet have. The motion is short, so I’ll look at it bit by bit.

(a) aware of the distress caused by recent divisions within the Anglican churches of the United States of America and Canada;

BabyBlue reads this to say that Synod recognizes ACNA to be one of the “Anglican churches”. I’m not sure that’s the case. Even if it’s included as one of those churches, this is merely an uncontroversial statement that there is distress. No one should read any assignment of blame or credit here.

(b) recognise and affirm the desire of those who have formed the Anglican Church in North America to remain within the Anglican family;

Here again, one could read all sorts of things into the text. Conservatives, who claim to prefer a “plain reading” would do well to follow their advice here. ACNA itself rather ridiculously claims that they, ACNA, have been affirmed here. But the motion plainly affirms only the desire to remain within the Anglican family. This again contains no value judgment on ACNA (or TEC or ACoC). You can see what I mean over at Unthinking Anglicans, where there’s a helpful example of the difference between affirmed reality and affirmed aspiration.

(c) acknowledge that this aspiration, in respect both of relations with the Church of England and membership of the Anglican Communion, raises issues which the relevant authorities of each need to explore further; and

Again, there’s nothing controversial here. To admit any of the “Anglican family” sects or groups into the Anglican Communion would raise issues. The motion merely points out that this will be complicated.

(d) invite the Archbishops to report further to the Synod in 2011.’

Here are a few further thoughts. I have grown weary of the topic, so you get bullet points, albeit lengthy.

This one is important, so it goes outside the bullet list. Here’s my main sorrow in all this: The church paid dearly in “opportunity cost” through all this. Imagine all the things General Synod could have accomplished had it not spent so much time and energy debating Lorna Ashworth’s motion. Imagine what might have been had Synod spent more of its energy on “Fresh Expressions” and other vital mission work of the church.

I am truly sorry that so many people have felt so unwelcome in the Episcopal Church that they have had to create new churches. It would be foolish to pretend that TEC hasn’t caused some of this through vindictive actions at times and through actions at other times that might have benefited from further reflection and clarification. Mostly I grieve that Christ’s body suffers as we turn our backs on his wish that we might all be one.

Unlike some progressives in TEC who are so frustrated by the Anglican Communion and the Church of England, that they are ready to go their own way, I see a sea change. Hope might be winning over fear. General Synod, in the end, did the wise thing. It said we need time, and we need to stay in relationship while we search for grace.

Let us all pray, with Jesus, that we all may be one. And let us imagine a hope-filled future where the Gospel is preached the ends of the earth. The devil is in the details, but only if we let the devil have a say. Let us be guided by the Holy Spirit, who leads us into all truth.

Photo from the BBC.