Tales from ACNA-Land: Putting the shoe on your foot 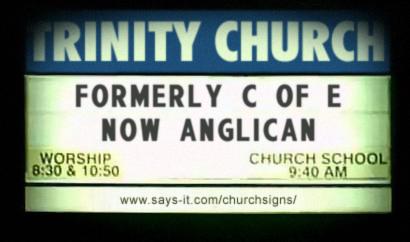 For the latest in my “Tales from ACNA-Land” series, I’m writing about something that will be unpleasant for my friends in England. You see, ACNA or ACE or EACNANA or GAFCE or some such is coming to a village near you. Make no mistake, the secessionist agenda will spread to England as the C of E inevitably disappoints the radical right wing in its efforts to reshape Anglicanism.

Now at this point, all of my English readers are smiling knowingly and muttering something like, “Cheerio, old yank! This can’t happen here in merry olde England. That’s not how it’s done, guv.” Of course, it’s not how we did things in the US before the radical right began to seek the takeover of our national political, cultural, and religious life. (Reminder — the C of E does have at least one living schism.)

This is actually part of the problem in the debate over Ms. Ashworth’s motion to recognnize and grant full communion to ACNA. By denying that anything like this could happen in England, Synod falls into the narrative that this is all somehow the fault of the Episcopal Church. But I remind you that these secessionists have already branded both the Archbishop of Canterbury and the Lambeth Conference as “lost.”

Tobias Haller does a nice job of putting the shoe on the other foot.

What would be done in the Church of England if the clergy and parish council of a parish in, shall we say, Dibley, announced that it was no longer part of the Church of England, but considered itself now to be a congregation of the Church of the Province of the Sudan, altered all of their signage and other public information to reflect this change, purporting now to be part of “The Anglican Church in England” and invited bishops from the Sudan to function in the parish, refusing to have anything more to do with their C. of E. diocese or its leadership?

This will happen, as Tobias writes. Do not doubt this will be going on in a few months or perhaps a few years.

The only chance to stop it is to look at the whole narrative and act accordingly. Did the Episcopal Church throw anyone out just for having the wrong theology? No. Did General Convention go out of its way to leave space for everyone in the proverbial big tent? Yes. Did ACNA and other radical people get frustrated and decide they wanted to form their own new church? Yes. And did they attempt to walk off with the silver? Yes.

Like dealing with a child who is throwing a tantrum, you cannot reward bad behavior. Recognizing secessionists in America ensures they’ll be in England sooner rather than later. Making it clear that they will not be recognized by the Anglican Communion because they chose to walk apart will at least slow them down.

When the Anglican Fellowship of Convening Global Christians (Southern Cone in England) sets up shop in your town, remember you heard it here first. General Synod should at least slow this down by giving ACNA a “time out” and not a treat.