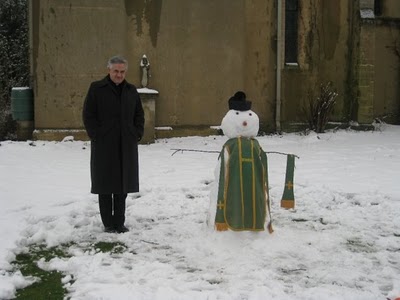 People in the Church of England and other joyless people (mostly secessionists in the USA) like to point out various bits of outrage, scandal, and heresy in the Episcopal Church. Sometimes, I agree with them. Of course, the fact that they extrapolate from these isolated examples to conclude that all Episcopalians are heretics is ludicrous. Or so I thought.

Now I understand that every person in the Church of England is a wanton heretic. Well, at least everyone in Oxford. You see, the Brits seem to have taken “chosen frozen” to an extreme. Forget gay priests. Forget women bishops. The Brits seem to have ordained a snow person. For all we know, this could be a partnered lesbian snowwoman. Or an openly gay snowman. Or someone who thinks Chris Sugden isn’t “Anglican mainstream” so much as ’round the bend. Either way, it’s an affront to good order, Christian tradition, and the country club atmosphere of the Anglican Communion hierarchy.

If you look at this photo, snapped at St. Stephen’s House in Oxford, you’ll notice the snow-creature, clearly vested as a priest. To add indignity to outrage, the priest is missing an alb and amice. What kind of priest could that be? A heretic, that’s what kind of priest.

I am grateful to the MadPriest for reporting this scandalous behavior. For those who would defend this, I ask you to show me one Bible verse which permits either the ordination of snow or the wearing of a maniple without also wearing an amice. One wonders if Archbishop Akinola knows about this? I might ring him and encourage him to drive by (in great style, I might add) to have a look.

Clearly the Church of England must be expelled from the Anglican Communion. We do not have time to wait for any so-called Listening Process (for snow, would that be a “glistening process”?). We do not have time for a Covenant. We can’t trust General Synod to figure this out, as they can’t even keep deadlines to get their current work done. This calls for immediate action. I urge everyone else to resign from the Joint Pontificating Central Committee of the Anglican Communion (or whatever it’s called these days in secret documents). Let’s get some guys (who might be divorced) with a website to publish faux-scholarly papers that demonstrate how this damages so-called traditional marriage.

I’m so glad we can finally take the focus off ECUSA and Canada. Now, if you’ll excuse me, I’ve got to go get myself made an archbishop and start a parallel jurisdiction. First order of business: schedule a conference and book a business class airline ticket.