I have the good fortune of serving at Christ Church with the Rev’d Melody Wilson Shobe. She preached a brilliant sermon on Christmas Eve, which she has agreed to share with you, dear readers. The text is Luke 2:1-20. Enjoy!

There is nothing quite like the power of stories, for children or for adults. Casey and I began reading aloud to Isabelle on the day that she was born, and we have continued to do it every day since then. It has been quite an adventure, reading to her the stories we read as children—from Babar to Paddington the bear, from Winnie the Pooh to The Velveteen Rabbit. As a child, I could read them over and over and over again and they never got old; they always had new things to say. And even now, each time I read one of my beloved childhood stories to my daughter, there are things that jump out to me that I never noticed before—words or images or illustrations that I looked at thousands of times as a child, but I see in a whole new way now. I am so excited, as the years go by, to continue to share with Isabelle the stories that have been so meaningful to me, and see them again in a new light myself. That is part of the power of stories, that they speak to us again and again and again, because there is always something new to be heard in their pages.

And there is, of course, perhaps no more beloved and powerful and enchanting story than the one that we come together to hear tonight. The story of that night, so many years ago, when two young wanderers were looking for a place to stay, and there was no room in the inn. The story of a pregnant woman beginning her labor of bringing new life into the world in a small, humble stable. The story of the shepherds in their fields with their flocks, and the angel and heavenly host singing their chorus of “glory to God in the highest.” The story of that holy, special night when God came into the world, a tiny baby, love incarnate, God with us.

It is one of those stories that I have read and heard a thousand times. I could probably, like Linus in Charlie Brown’s Christmas special, start at the beginning and recite it the whole way through. “In those days a decree went out from Emperor Augustus that all the world should be registered…” And yet, much like when I read stories now to Isabelle, I notice something new every time I read it or hear it read. Something different jumps out at me, speaks to me, calls to me.

This year was no exception, as I read and reflected on this beautiful story for tonight. I’ve often thought about Mary and the baby. I wrote a whole sermon a few years ago about poor, overlooked Joseph. But this year, it was the shepherds who captured my imagination. Have you ever noticed before that it’s a little bit strange that shepherds are the first ones that the angel of the lord appears to, in order to tell them of the birth of God? Not kings or princes, not the rich or the privileged, not the priests or the sages. Shepherds. Shepherds—who sleep in the fields with their flocks for weeks on end without homes or beds or showers. Shepherds—who are largely uneducated, unclean, uncouth members of society. That’s who God chooses to get the good news first. That’s who gets the angelic appearance, and the songs from the heavenly host.

I think, this well beloved story about the shepherds speaks to us of the inclusive nature of our God who reaches out to all of us, even the least and the lost. Not just those of you who are here every Sunday, but those who are here tonight for the first time. Not just those of you who go home to big houses and piles of presents, and lots of family, but also those who go home alone to empty houses and few gifts. If God can show up to shepherds, of all people, if they not only get the good news, but receive it first and foremost, if God’s love reaches even to them, than God can and does come to us, God’s love is big enough for all of us—old and young, rich and poor, straight and gay, etc.

And the message of the shepherds doesn’t stop there. In fact, we have a great deal to learn from these shabby shepherds who, for some unknown reason, are given the gift of experiencing this great story first-hand. Because the power of the shepherds is not only about who they are, but what they do when they hear the good news. They don’t just say “wow, that’s exciting,” and then keep tending their flocks. They don’t say, “Well, the Messiah has come, so we’re okay now. We don’t need to go see him, it’s enough that he’s here.” They don’t thank the angels for the information, and then go back to business as usual. 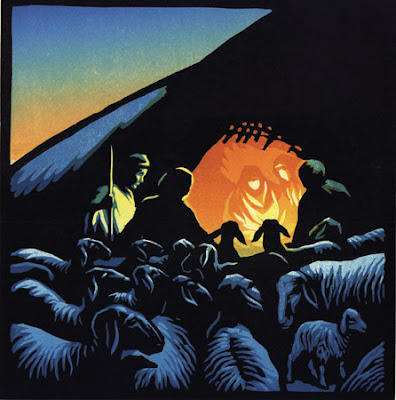 No. As soon as the angels depart and the songs of the heavenly host fade, the shepherds get up and go. They go immediately and with haste to be near this Christ child. Now, this is a big deal, because they are shepherds. Their whole job is to stay with the sheep. So in order to go see Jesus, they will have to do one of two things. They can take their herds of dozens and dozens of sheep with them, herding the slow, rather ornery creatures for miles and miles, over hills and dusty roads and through towns. This will probably take a very long time, and be extremely difficult. Or, they can do the worst thing that a shepherd can possibly do and leave their sheep in the fields, alone. The sheep, who are all that they have in the world, who will probably wander away or get eaten by wolves or bears or injured in the time that it takes them to go and come back.

It wasn’t easy for the shepherds to respond to the story that they’ve heard. It meant a lot of time, and a good deal of energy, and no small amount of sacrifice. It would have been easier to stay in place, their lives unchanged other than a blip on the radar. But they don’t. Somehow, they know that this story requires a response, that this news it just too good to ignore. So they go to see the messiah, to worship the Christ child, to just be in God’s presence.

They go to encounter God, and they are forever changed by that encounter. At the end of the story, the shepherds do go back to their fields and flocks. They return, to where they were before. But they are no longer the same. Before, they were unknown, unkempt shepherds who no one knew or cared about. Now, they are people who had the glory of the Lord shine around them, whose story is told today, thousands of years later, all around the world. From that day onward, those lowly shepherds, in the midst of their daily life and labor, glorified and praised God So tonight’s beloved story ends, not with Mary and Joseph, not with the angels or heavenly hosts, not even with that baby in the manger. Instead, the story ends with the shepherds, who “glorified and praised God for all they had heard and seen.”

I think, perhaps, the story ends with the shepherds to remind us that the story doesn’t end at all. It still goes on, it is still told and lived out today. We, like the shepherds, are told the amazingly good news of God’s presence among us. We hear it tonight in the gospel reading, and we hear it week in and week out as we gather in church together. And we, like the shepherds, are given a choice. We can stay where we are, unchanged by the story that we’ve heard. We can go home tonight after this beautiful service and say “wasn’t that nice,” then go about our usual lives. We can thank God for the information, and then go back to business as usual. Or we can decide to respond. To leave our flocks, or take them with us, even though it will be difficult and take time, and be costly. We can decide to change and be changed by the story that we’ve heard, to reorient our lives in order to glorify and praise God from this day forward.