Warren Buffett on the economy 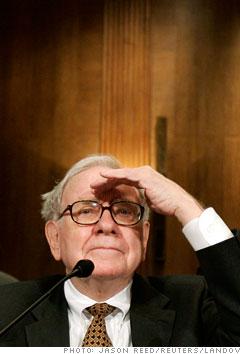 I’ve been trying to make sense of all the pundits and prognostications about our economy lately. Mostly I’ve suspected two things, which might seem contradictory. First, this is all worse than we might want it to be. We’re only getting started in financial woes. Second, this too shall pass. In another post, I’ll weigh in with my $.02 on the moral implications of all this (short version: our culture is getting a badly needed correction that will ultimately be good for us). Anyway, back to my current topic.

I ran across Warren Buffett’s annual letter to his shareholders today. This is a man I’d listen to over 5 Wall Street Journal columnists, 10 CNN talking heads, or 600 Fox News yappers. The letter, running to 22 pages, is well worth reading. For one thing, it’s funny. Financial wizards are not known for their humor, which makes that all the more delightful. For another thing, Buffett shows a remarkable transparency and honesty about his mistakes. One imagines that if there were more business leaders like him, we might not be in this mess. The letter is also clearly written, shuc that a finance novice like myself can understand it. Mostly though, I think this letter is helpful in terms of its analysis of our present situation and our prognosis.

Amid this bad news, however, never forget that our country has faced far worse travails in the past. In the 20th Century alone, we dealt with two great wars (one of which we initially appeared to be losing); a dozen or so panics and recessions; virulent inflation that led to a 21 1⁄ 2% prime rate in 1980; and the Great Depression of the 1930s, when unemployment ranged between 15% and 25% for many years. America has had no shortage of challenges. Without fail, however, we’ve overcome them. In the face of those obstacles – and many others – the real standard of living for Americans improved nearly seven-fold during the 1900s, while the Dow Jones Industrials rose from 66 to 11,497. Compare the record of this period with the dozens of centuries during which humans secured only tiny gains, if any, in how they lived. Though the path has not been smooth, our economic system has worked extraordinarily well over time. It has unleashed human potential as no other system has, and it will continue to do so. America’s best days lie ahead.

This is honest — we’re in trouble! — but not irrationally fearful. In the preceding paragraphs, Buffett describes what positioned us into where we are, and he specifically says, “The U.S. – and much of the world – became trapped in a vicious negative-feedback cycle. Fear led to business contraction, and that in turn led to even greater fear.”

I appreciated his sense that something had to be done. While he might not have approved of every step the government has taken, Buffett suggests that this crisis needed swift and dramatic action.

This debilitating spiral has spurred our government to take massive action. In poker terms, the Treasury and the Fed have gone “all in.” Economic medicine that was previously meted out by the cupful has recently been dispensed by the barrel. These once-unthinkable dosages will almost certainly bring on unwelcome aftereffects. Their precise nature is anyone’s guess, though one likely consequence is an onslaught of inflation.

Moreover, major industries have become dependent on Federal assistance, and they will be followed by cities and states bearing mind-boggling requests. Weaning these entities from the public teat will be a political challenge. They won’t leave willingly. Whatever the downsides may be, strong and immediate action by government was essential last year if the financial system was to avoid a total breakdown. Had one occurred, the consequences for every area of our economy would have been cataclysmic. Like it or not, the inhabitants of Wall Street, Main Street and the various Side Streets of America were all in the same boat.

Many business leaders and Wall Street types are bemoaning the solutions that the Obama administration is proposing. Consumers will not be pleased with some necessary cuts in services or increases in some taxes. But those of us who got our country into this mess (and most everyone is complicit — we don’t get to point fingers at Wall Street fat cats and leave it there) will have to swallow some of the bitter medicine.

So we’ll have to tighten our belts a bit. People will be forced to give up cars and houses. Many people will lose jobs. Those with jobs will need to support transitional assistance for those caught up in our economic upheaval. But when we’re through this — and we will get through this — our society should be more sustainable and less greedy. Sadly, and painfully, we are reaping what we’ve sown.

I’m glad Warren Buffett says our best days are ahead.  That should help us all through the tough times at present.