Why national polls are worthless 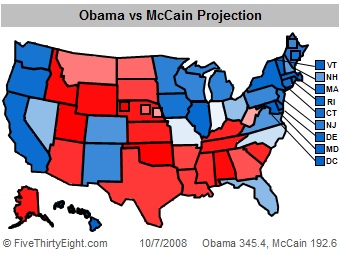 Anyone who was awake during any portion of government class in high school will know that direct popular vote doesn’t matter in the presidential election. It’s all in the Electoral College, dude. So I don’t know why we keep reading about national poll this & that.

There are several good sites around to track the more important and actually useful state-by-state situation. I recommend three. If you want leftist numbers, have a look at fivethirtyeight.com or electoral-vote.com. If you want right-leaning numbers, pop over to electionprojection.com. All three sites have about the same information these days: an Obama victory looks very likely.

This is why you can expect McCain to try to bring out some serious venom in tonights debate and for the next few weeks. The Rebublicans will want a repeat of their Swift Boat “success.” If you can’t win fair & square, play dirty. That seems to be the credo in our nation’s capital.

Anyway, pay no attention to national aggregate vote count data. They simply don’t matter. Whether McCain has more total votes than Obama is interesting, but somewhat irrelevant. Of course, failing electoral college clarity, it helps to have lots of friends on the Supreme Court.

Map from fivethirtyeight.com. This is today’s version; check daily for updates.