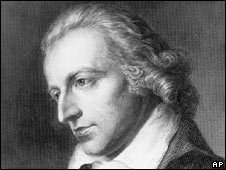 The celebrated German poet Friedrich Schiller, dead for more than 200 years, has been sent reminders that he should pay his TV and radio licence fee. The German fee collection agency, GEZ, mistakenly sent letters to “Mr Friedrich Schiller” – which arrived at a primary school bearing his name. The author of Ode to Joy had been registered with GEZ as a householder.

We’ve always known that poets are dangerous. Now that we know they are costing taxpayers, we should be even more wary.

Speaking of Schiller, I recently saw one of his plays, Don Carlos, at the Gamm Theatre in Pawtucket, RI. I highly recommend both the play and the venue. You can still see the play this weekend if it’s not sold out. Buy tickets now!