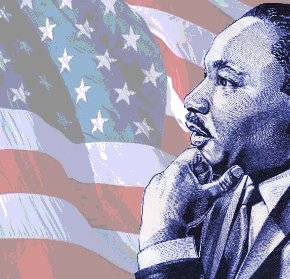 What if St. Paul wrote a letter to American Christians, not just to ancient churches? Martin Luther King, Jr. imagined such a letter. Though it’s less widely known than some of MLK’s other works, I urge you to read this letter today, in its entirety. Find friends and read parts of it out loud. It’s astounding to me that it was written in 1956, but just about all of it could have been written this year (sort of the way Paul’s real letters still seem fresh after almost 2,000 years).

Here are two snippets to whet your appetite.

And this one is especially apt on a day when our politicians trot out cheap jingoistic speeches:

American Christians, I must say to you as I said to the Roman Christians years ago, “Be not conformed to this world, but be ye transformed by the renewing of your mind.” Or, as I said to the Phillipian Christians, “Ye are a colony of heaven.” This means that although you live in the colony of time, your ultimate allegiance is to the empire of eternity. You have a dual citizenry. You live both in time and eternity; both in heaven and earth. Therefore, your ultimate allegiance is not to the government, not to the state, not to nation, not to any man-made institution. The Christian owes his ultimate allegiance to God, and if any earthly institution conflicts with God’s will it is your Christian duty to take a stand against it. You must never allow the transitory evanescent demands of man-made institutions to take precedence over the eternal demands of the Almighty God.