A house not for mere mortals

Just when you think you’ve seen the most extraordinary house design, the NY Times proves you wrong. 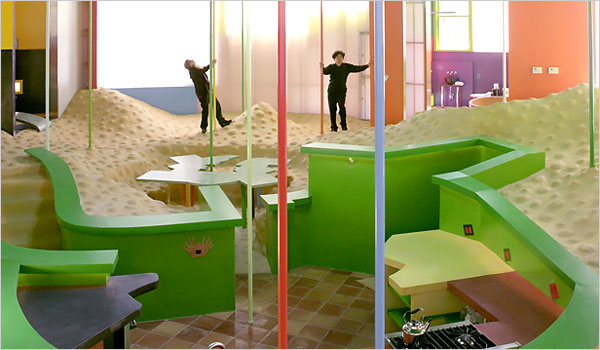 The house is off-limits to children, and adults are asked to sign a waiver when they enter. The main concern is the concrete floor, which rises and falls like the surface of a vast, bumpy chocolate chip cookie.

[A co-owner] began holding forth about the health benefits of the house, officially called Bioscleave House (Lifespan Extending Villa). Its architecture makes people use their bodies in unexpected ways to maintain equilibrium, and that, she said, will stimulate their immune systems.

“They ought to build hospitals like this,” she said.

A reporter, who thinks they should never, ever build hospitals like this, tried to go with the flow. Like the undulating floor, Arakawa and Gins, as they are known professionally, tend to throw people off balance.

When it comes to creativity, the architecture is matched by their views on death.

In 45 years of working together as artists, poets and architects, they have developed an arcane philosophy of life and art, a theory they call reversible destiny. Essentially, they have made it their mission — in treatises, paintings, books and now built projects like this one — to outlaw aging and its consequences.

“It’s immoral that people have to die,” Ms. Gins explained.

Wow. Defeating death by constructing extravagant buildings. What goes around comes around.