A Priest to the Temple — The Parson’s Condescending

Our Herbert Festivall continues, with another installment of A Priest to the Temple. My comments are after the jump. 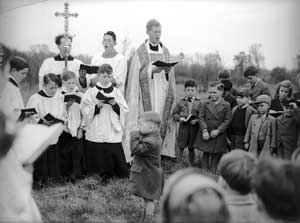 THe Countrey Parson is a Lover of old Customes, if they be good, and harmlesse; and the rather, because Countrey people are much addicted to them, so that to favour them therein is to win their hearts, and to oppose them therin is to deject them. If there be any ill in the custome, that may be severed from the good, he pares the apple, and gives them the clean to feed on. Particularly, he loves Procession, and maintains it, because there are contained therein 4 manifest advantages. First, a blessing of God for the fruits of the field: Secondly, justice in the Preservation of bounds: Thirdly, Charity in loving walking, and neighbourly accompanying one another, with reconciling of differences at that time, if there be any: Fourthly, Mercy in releeving the poor by a liberall distribution and largesse, which at that time is, or ought to be used.

Wherefore he exacts of all to bee present at the perambulation, and those that withdraw, and sever themselves from it, he mislikes, and reproves as uncharitable, and unneighbourly; and if they will not reforme, presents them. Nay, he is so farre from condemning such assemblies, that he rather procures them to be often, as knowing that absence breedes strangeness, but presence love. Now Love is his business, and aime; wherefore he likes well, that his Parish at good times invite one another to their houses, and he urgeth them to it: and somtimes, where he knowes there hath been or is a little difference, hee takes one of the parties, and goes with him to the other, and all dine or sup together. There is much preaching in this friendliness. Another old Custome there is of saying, when light is brought in, God send us the light of heaven; And the Parson likes this very well; neither is he affraid of praising, or praying to God at all times, but is rather glad of catching opportunities to do them. Light is a great Blessing, and as great as food, for which we give thanks: and those that thinke this superstitious, neither know superstition, nor themselves. As for those that are ashamed to use this forme, as being old, and obsolete, and not the fashion, he reformes, and teaches them, that at Baptisme they professed not to be ashamed of Christs Cross, or for any shame to leave that which is good. He that is ashamed in small things, will extend his pusillanimity to is greater. Rather should a Christian Souldier take such occasions to harden himseife, and to further his exercises of Mortification.

First, let me say, this provides just the rationale that could be handy for the rogationtide procession I had planned. Seriously, I think the tenor of this chapter is helpful. Many clergy, especially of the younger sort, are all eager to transform the church. I’m among that lot. However, there is also much to be said for honor the ancient customs of the church and its people. If Herbert were writing today, he might defend the parish supper or something. It’s beloved by some of the long-time members, but may not appeal to newer members. Still, it is worth keeping these “good and harmlesse” traditions. So as we’re sorting out the balance of what to discard and what to keep, let us treasure not only the latest innovations, but also the oldest traditions.

And, yes, I am indeed planning that rogation procession. If you’re in town on Rogation Sunday, stop by Christ Church, Lincoln, RI. We’ll be the chaps wandering around with crosses, torches, wardens staves, and incense.

(Image courtesy of the Watford Observer.)